A television started to become a staple in households all over the world in the 1950’s. For Classic Hollywood this was very unfortunate timing: in 1948 the decline of the studio system had begun. This was the year of the verdict in the antitrust case United States vs. Paramount Pictures, inc., because of which the practice of block booking was outlawed and all the studios were forced to sell their theater chains. There was no more guarantee that their movies would be distributed and seen. Meanwhile actors, writers and directors were protesting against their contracts with the studio, which gave them no power over their careers. The power of the studios, which was so important for Classic Hollywood, was unraveling.


Meanwhile more and more households started to own a television. A family did not have to go to the movies anymore for entertainment. The days of film serials and newsreels that ran before and between movies quickly came to an end as short subjects, news programs, and cartoons migrated to TV. Many of the Hollywood studios tried to make the most of it and made special Television departments that made ‘telefilm’ productions. However, television networks feared that Hollywood might take over control and they were reluctant to do business with Hollywood out of fear that TV might be weakened as a medium and become just a new system of distribution for Hollywood. Local television stations did receive the library of the minor studios, so in the early days of television a lot of black and white B-movies were aired. But in September 1961, after years of going back and forth, the time was ripe for television networks to show major Hollywood feature films on prime time a few years after their theatrical release. NBC led the way by establishing “Saturday Night at the Movies” in September 1961, showing How to Marry a Millionaire. Although it helped revive interest in Classic Hollywood features of the past, it did nothing to pull audiences into movie theatres. 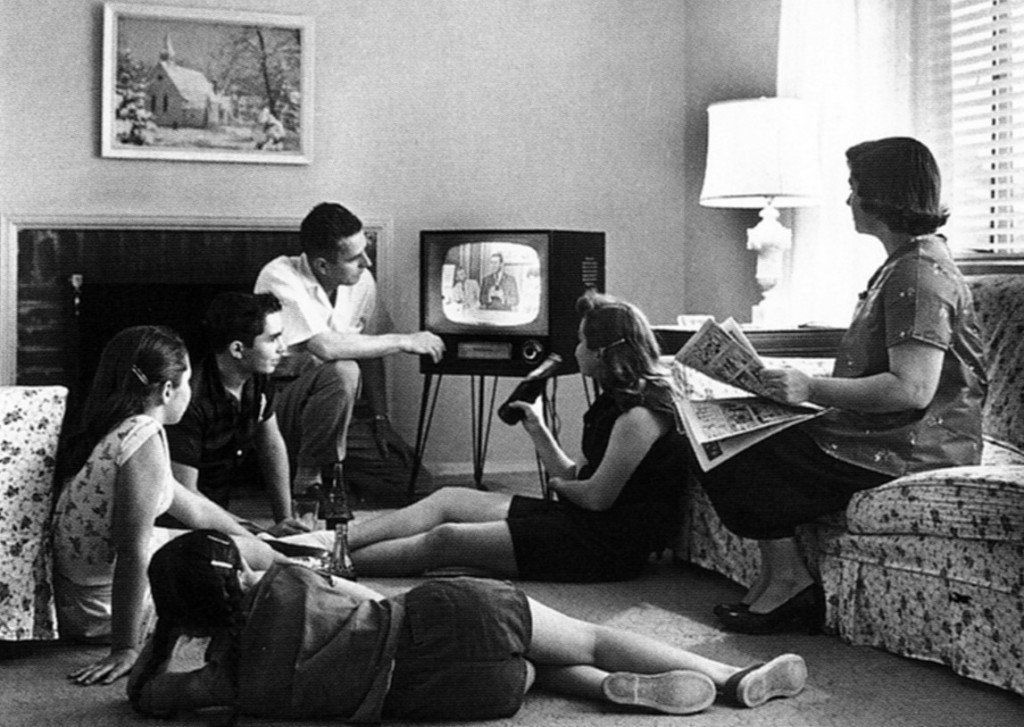 But television did more than just provide entertainment: it changed the world we live in. It rapidly increased the presence of media in our daily lives and created the ‘mass media’ that we know today. Television shapes the public opinion. A good example are the presidential elections that were won as a result of the impact the highly televised debates had on the audience. But it also created a new way of living, as cultural historian J. Hoberman puts it: ‘television had fully penetrated the nation’s homes, bars, and motel rooms. Less an entertainment medium than a total environment, TV was now the great equalizer, streamlining the imagined community, rationalizing the dream life, offering everybody everything, including something to blame. It was in this context that all events—news as well as movies—occurred’. Television also offered the viewer a more realistic look into the world, something that Classic Hollywood tended to gloss over. Suddenly Classic Hollywood seemed terribly outdated.
Slowly but surely Hollywood tried to catch up. An example of this is the success of Rebel Without A Cause, which dealt with teen angst for the first time in the history of cinema and made James Dean the hero of a generation. But still, Hollywood tried too hard to compete with television by creating over the top entertainment, like the very unsuccessful Hello, Dolly!. Something had to change. And soon it did.
In the late 1960’s Classic Hollywood was officially over with the introduction of American New Wave, also referred to as ‘post-classical Hollywood’. The greatest change this new group of filmmakers brought to the art form was an emphasis on realism. The glamorous dream machine of Classic Hollywood was gone. This generation celebrated anti-establishment and anti-heroes, no doubt influenced by what they had seen on TV. Two great examples of American New Wave are Easy Rider and Bonnie and Clyde. Easy Rider is very symbolic of this time because of its background: it was created by Peter Fonda, the son of Classic Hollywood star Henry Fonda. It was a passing of the torch, for father and son, as well as for Classic Hollywood and New Hollywood. A new era had begun.