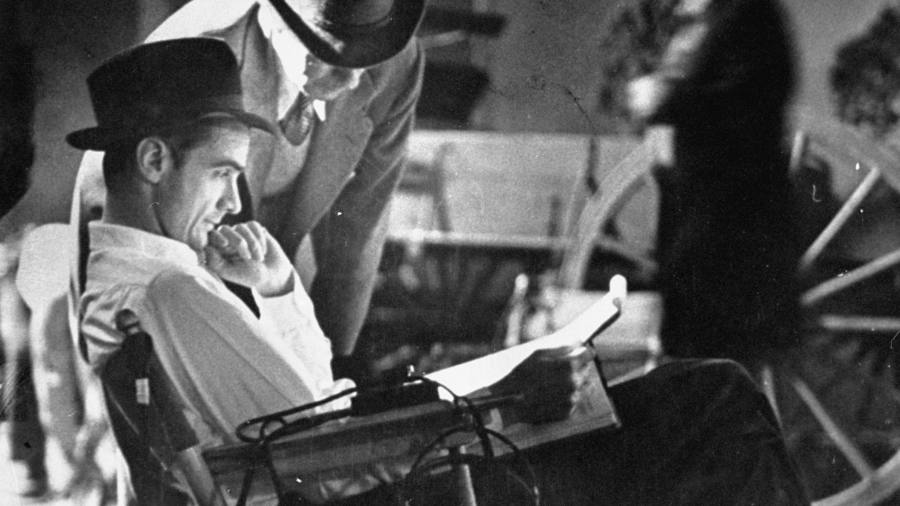 When people think of Howard Hughes, they usually think of a billionaire who was obsessed with airplanes. This is true, but there was more to Howard than that. According to his friend Ava Gardner, Howard actually had four obsessions: ‘money, movies, aircraft and young women with beautiful breasts’. For the movies and the women, Howard ventured to Hollywood in the 1920’s. Here, he was a familiar character until he turned his back on the town in the 1950’s. In those decades in between he made a big impact on the town and its residents.

Howard Hughes was only seventeen when his mother died and nineteen when his father passed away. This made him the heir of a million dollar estate, a lot of money in 1924. His father was the founder of Hughes Tool Company which invented the rotary tri-cone rock bit, used to drill oil. Drilling oil became the new frontier to make it big for struggling Americans, so this invention became more and more valuable. From 1934 through 1951, the company held 100 percent market share of the rock drill bit, making Howard one of the richest people in the world. Long story short: Howard was set for life.
So what is a young millionaire with no responsibilities to do? For Howard this meant an opportunity to follow his two dreams: aviation and filmmaking. He first set out to conquer Hollywood, perhaps inspired by his uncle Rupert Hughes, who was a screenwriter and director.

The first short film Howard produced, Swell Hogan (1926), was a flop. But Howard was not one to be deterred by a single mistake. His next four films proved to be great successes, with Two Arabian Knights (1927) winning an Academy Award for Best Director. Howard then turned his focus on his first directing attempt: Hell’s Angels. The production was fraught with problems, mostly because of Howard’s overbearing production and perfectionism. Midway into the making of Hell’s Angels, silent films became a thing of the past and ‘talkies’ were the new way to go. Howard cut everything, starting from scratch to make the film a talking picture. The leading lady was fired and replaced by up-and-comer Jean Harlow. She was only eighteen years old, but Howard had already decided that she would be marketed as a sex symbol. He kept cutting her dress so her cleavage became more and more pronounced during filming. As an aviator enthusiast, Howard wanted the aircraft scenes to be perfect and he tinkered with them endlessly. The film cost him millions, but it did become the hit he so desperately wanted. Howard turned out to be good at marketing: the film was edgy, with plenty of swearing and violence, and Jean Harlow would never get rid of the blonde bombshell image he gave her. Howard was now a Hollywood big shot, like he’d always wanted to be.

His second big production was the original Scarface. He hired popular director Howard Hawks to shoot it and was surprisingly professional during filming. It took six months to shoot, but release was postponed a year because censorship was required. Howard had not lost his appetite for controversial films. Though this was before the strict Hays Code, Scarface was still too violent for its time. It was loosely based on Al Capone and the censorship committee was worried that it glorified violence and crime. Scarface was popular among release, but so many cities refused to show the film, that Howard ultimately took it out of rotation.

Through his success, Howard had become a popular figure in Hollywood. He was the handsome, successful mogul who everybody knew. Personally or by reputation. He made good use of this by dating all the beautiful actresses who would oblige. He reportedly dated Carole Lombard, Ava Gardner, Olivia de Havilland, Gene Tierney, Lana Turner and many more. Bette Davis was always honest about her affair with Howard, detailing how he made love to her on a bed full of rose pedals. His two longer relationships were with Katharine Hepburn and Ginger Rogers. Katharine would always speak fondly of Howard. They were both independent, new in Hollywood and obsessed with becoming famous. She was never under the illusion that Howard was faithful to her, but he was serious about their relationship. He proposed, but Katharine said no. She had no intention of getting married again after her failed first marriage.
Ginger wás the marrying type and Howard soon became crazy about her. They had dated before and he had always kept a soft spot for her. When their relationship picked up steam, he proposed to Ginger. She accepted, but wanted to live separately until the wedding. Soon, Ginger found Howard dominating her every move. She even discovered that he was having her followed and taped her phones. He was also cheating on her, as he would never be faithful to any women. Ginger became fed up and broke up with him. ‘Howard wanted to get himself a wife, build her a house and make her a prisoner in her own home while he did what he pleased,’ Rogers later wrote. ‘Thank heavens I escaped that.’

Later, he became obsessed with Ava Gardner. She said she ‘couldn’t get rid of him for fifteen years’. She never took his promises seriously, but stayed in touch with him throughout her relationships with other men. Though Ava wanted to remain friends, Howard always wanted more. According to Ava, he got so jealous once, he started beating her. She picked up an ornamental bronze bell and hit him in the head. She was so furious that she started beating him with a chair, until her maid stopped her. It didn’t deter Howard from trying to pursue her in the following years.
Another famous actress he was obsessed with, was a sixteen year old Elizabeth Taylor. He proposed marriage, offered to buy her a movie studio and literally showered her with diamonds as she was sunbathing. Despite her mother’s enthusiasm, Elizabeth turned him down.

For awhile, Howard focused on his aircraft ambitions. He started Hughes Aircraft Company in 1932 and in 1938 he set a world record by flying around the world in 91 hours. He went back to filming in 1941, with The Outlaw. He became obsessed with getting starlet Jane Russell to star, even though he had only seen a picture of her and read her measurements. His objective was to use her ample breasts as the movies stars. He even created a special bra to keep them upright, as push-up bras hadn’t been invented yet. He would take one-hundred takes of a single moment on screen and then look for the one in which her chest looked the best. This, and the fact that the centre of the plot was a rape scene, became a problem with the censorship board once again. Howard used this to his advantage: he got the sexiest picture of Jane Russell to promote The Outlaw and did everything he could  to fuel the outrage over the film. He knew that would only drum up more publicity and curiosity. Eventually the film was released for one week in 1943, before being pulled by the censors, and it was widely released in 1946. The film did well and Howard got the publicity he craved.
In the meantime, Howard was still passionate about building new airplanes and setting world records. This resulted in multiple plane crashes. He became addicted to opiates and his already obsessive-compulsive behavior started spiraling.

This also showed in the way he treated women. Having bought a majority of stakes in movie studio RKO in 1948, he was free to offer any woman a studio contract. He made a habit of looking for young, beautiful starlets. He would offer them a contract, seduce them and propose marriage. Although an engagement was taken very seriously in those days, Howard used it as a ploy. He would buy them a house, which was entirely under the surveillance of his team. Once he was bored with the girl in question, he disappeared and never put them in a movie. This way, the girls were under his complete control. Because of their contract, they couldn’t star in a movie for another studio and because of his surveillance, they couldn’t date anybody else without his permission. By the time their contract had ended, their ‘prime’ in Hollywood years was gone and it was incredibly difficult for them to start over. Actress Faith Domergue, who was only 16 when she fell for the 35-year old Howard, wrote a book about this experience with him. Actress Terry Moore claims he manipulated her by marrying her on international waters and then destroying the ship log to get rid of the evidence.
There were good stories too: Gene Tierney once relayed that Howard paid for the best medical care when her daughter Daria with designer Oleg Cassini was born deaf and blind. When Ava Gardner and her sister couldn’t get a plane ticket after her mother passed away, Howard made sure they were flown out to her hometown that very same day.

Howard was so compulsive that every aspect of the movies RKO made had to be perfect. A simple scene would need to be re-shot again and again and a film could lay on a shelf for months just because he couldn’t decide on a title. While RKO usually churned out about 30 movies a year, only 9 were released in Howard’s first year on board. More and more minority shareholders were suing him over financial misconduct and corporate mismanagement. His solution was to buy their shares until the studio was almost entirely his. But in July 1955, Howard cut his losses and sold his shares to the General Tire and Rubber Company for $25 million. Many blamed Howard for destroying the once influential RKO studio. It was time for Howard to turn his back on Hollywood.
In the years to come, he would focus on his airline and his real estate business. He bought so many hotels and casinos in Las Vegas that he became the largest employer in Nevada. He still had a soft spot for actresses: in 1957 he married actress Jean Peters, though their marriage was unconventional. They often lived apart and divorced in 1971. By then, his mental and physical health had severely declined. Plane crashes had caused him many physical ailments and a reported case of neurosyphilis had worsened his mental health significantly. He was addicted to codeine and extremely paranoid. He moved from hotel to hotel, not seen by anybody but his staff. The last ten years of his life were rife with rumors about his health, whereabouts and eccentricities. Eventually, he died on an airplane in April 1976. His reclusiveness and drug use had made him unrecognizable, so the FBI identified him through fingerprint. Since there was no will, his $2,5 billion estate was split among 22 cousins.
His influence in Hollywood remains, though. His marketing tactics were unique for its time, but commonplace now: create a Hollywood bombshell to lure moviegoers, make a movie that pushes the boundaries for the censorship board and use the films notoriety to gain publicity. He was seen as a Hollywood maverick, but his unique approach worked. Some of his movies, like Scarface, have made a lasting impact on the industry. And there aren’t many classic Hollywood autobiographies in which the notorious Howard Hughes doesn’t make at least one appearance….