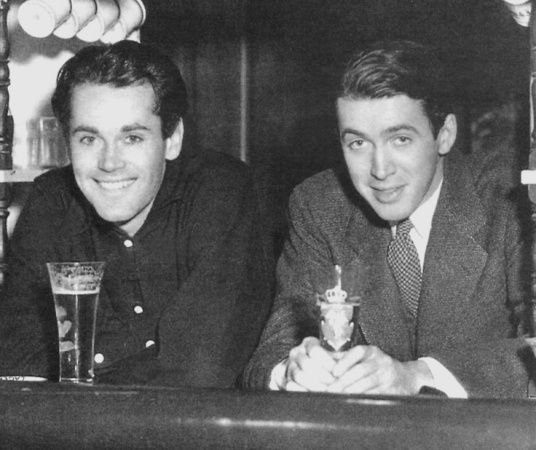 In Classic Hollywood Friendships we take a look at the strong bonds some actors formed along the way. Although Hollywood isn’t known for being the most authentic place, some genuine friendships were built here. In a place where you never know who to trust, these people knew that they had each other’s backs. We start this series with a deep-seated friendship that lasted over 50 years: the friendship between Henry Fonda and James Stewart.

The Beginning of a Friendship

The two tall, young actors had met briefly when James Stewart attended a play featuring Henry Fonda’s then-girlfriend Margaret Sullivan. Soon afterwards, they found themselves struggling actors in New York City during the Depression era. They rented an apartment, together with Joshua Logan and Myron McCormick. The apartment was small and run-down. It had only one bed, which the person who managed to pay rent that month got to sleep in. Henry and James, or Hank and Jimmy, became incredibly close. Both were introverts and they could sit in comfortable silence together. The two pals also started a common hobby: building model airplanes together. They also shared a tendency to feed all the stray cats, causing groups of them to gather at their backdoor daily, waiting for food.
Both of them happened to be offered a contract by a big Hollywood studio in 1935. This time they moved into a nice house in Brentwood, Los Angeles together. The pair became known as the nicest playboys in Hollywood. Enjoying their success and dating plenty of fellow actresses. Both men had feelings for Henry’s ex  Maureen Sullivan. Neither acted on them and it never got in the way of their friendship. Hank, always the more serious one, felt the need to settle down first. He married his second wife (he had briefly been married to Sullivan) Francis in 1936 and together they had two children: Jane and Peter. Jimmy was Jane’s godfather and she mostly remembers them quietly building model airplanes together, perfectly content. Jimmy was still a popular bachelor, he dated women like Olivia de Havilland, Marlene Dietrich and Ginger Rogers.

Then came World War II. Both Hank and Jimmy had a strong sense of duty and justice. They volunteered for the army and were deployed to different countries. The war had a major impact on the two men. Hank, who was already a serious and melancholy person, became even more withdrawn. Jimmy, who had been more happy-go-lucky, became more serious and melancholy. Both of them refused to talk about the war when they returned. They struggled being back in Hollywood. All Hollywood movies seemed trite and unrealistic to them now. Hank suggested that Jimmy moved into a little house in his backyard that he had built for Jane and Peter. Jane later remembered how strange it was to see this big Hollywood star in a house the size of a bathroom, covered in cat pee from all the strays he was feeding. She added that it wasn’t just her uncle Jimmy who found solace there; her father seemed happier and lighter when his best friend was around as well. The pair found a new hobby during this time: flying kites. They had come back from the war far older than they were, but they could unleash their goofier sides when they were together. They even acted out elaborate practical jokes on each other and colleagues.

It was around this time that Jimmy and Hank had their first and only fight. Despite all they had in common, they had two fundamental differences: Jimmy was a religious Republican and Hank an agnostic Democrat. The House of Un-American Activities became active in Hollywood after the war, blacklisting everyone who had supposed ties with Communism. This triggered the first big political discussion between the friends, which became so heated that it turned into a fistfight! Afterwards, they decided to never talk about politics again because their friendship was too important. Jimmy had come back from the war a different man and he was ready to settle down. In 1949 he married former model Gloria. He adopted her two sons and together the pair had twin daughters  Kelly and Judy. As Jimmy’s personal life settled down, Hank’s became troubled. He asked his wife Francis for a divorce in 1949 and she committed suicide soon after. He would go on to marry two more times before finally finding the one in his fifth wife Shirlee in 1965. Both men found fulfillment in their career again. Jimmy started playing more serious roles and Hank did more plays. Although going back to the theatre meant that Hank spent more time in New York, their friendship persisted. No matter how long they hadn’t seen each other, they always picked up right where they left off.
In 1968 and 1970 they made their only two movies together. This was especially important to Jimmy, who had just lost his stepson in Vietnam. Although his goddaughter Jane openly opposed the Vietnam war, he wouldn’t hear a bad word about her. When the horse he had worked with for decades got sick during filming, Hank showed up at Jimmy’s doorstep with a painting he had made of it.

As they approached old age, both got into gardening. Jimmy would bring Hank produce he’d grown and Hank would bring Jimmy honey his bee’s had made. Family and friends commented that Jimmy acted older than his age, almost going into an early retirement. Hank, on the other hand, never stopped working. He was already sick when he made his last movie On Golden Pond with Katharine Hepburn and his daughter Jane. In 1982 Hank was admitted to the hospital for the last time. Jimmy was at his bedside every day. They never spoke of the big things, like illness and death. Instead, they reminisced about the old days or talked about gardening. Both were hard of hearing, forcing them to yell at each other. This tickled Hank, who was aware how silly they must sound to others. Sometimes they’d just be silent together, just like old times. Hanks passed away on August 12, 1982 at the age of 77. Jimmy was devastated. His only response to the press waiting for a quote was: ‘I’ve just lost my best friend’.
After Hank’s death, Jimmy struggled with old age. His house wasn’t filled with kids like it used to be and his friends were passing away one by one. Hearing loss caused him to lean more and more on his wife Gloria and he did not leave the house much. His daughter Kelly commented that he wasn’t so much depressed, it was more like he ‘felt he’d done enough’. In the next decade, he became active in philanthropy, organizing ‘The Jimmy Stewart Relay Marathon Race’ which raised money for the Child and Family Development Center. He published a poetry book and became known as the voice of Campbell’s Soup commercials. When his wife died in 1994, his health deteriorated. Jimmy passed away on July 2, 1997 at the age of 89. Before he died he talked about Hank during an interview: ‘This friendship with Fonda over the years was tremendous. I valued it so much. Tremendous Friendship, tremendous admiration for him. It was a terrible thing to lose him. Fonda was a wonderful, close friend.’