They were at the height of their fame when they became the ultimate celebrity couple: Clark Gable and Carole Lombard. He was known as ‘the King of Hollywood’ and she was America’s Sweetheart. They were in it for the long haul, but fate got in between.
Classic Hollywood Central takes a look at some of Classic Hollywood’s real life love stories and continues with the tragic love of Clark Gable and Carole Lombard.

Clark Gable and Carole Lombard first met on the set of No Man of Her Own in 1932. At the time, Clark was married to Ria Langham and Carole was married to William Powell. Both marriages weren’t very successful: Carole would divorce Powell a year later and Clark was cheating on his wife with actress Joan Crawford. But despite their future romance, Clark and Carole were more annoyed with each other then enamored. At the end of filming Clark presented Carole with a pair of oversized ballet shoes, to match her inflated prima donna ego. She gave him a gift that she said represented his acting abilities: a large ham with his picture on it! Since they were both fond of jokes like this, there were no hard feelings, but they did not keep in touch either. 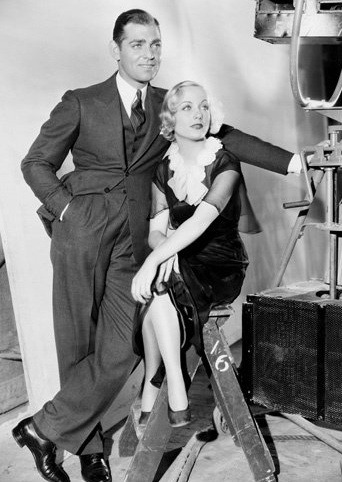 Four years later Clark was hitting a home-run in his career by making film after film with Jean Harlow and Carole had become the queen of ‘screwball comedy’. Carole was divorced and Clark had separated from his wife Ria. It was during this time that they met again at a party. They danced together several times and sparks flew. Soon enough, the two started spending more and more time together. They seemed to be made for each other: Clark was a real man’s man who loved the ladies and the outdoors, Carole was a beautiful woman who could swear like a sailor and spoke her mind. Carole participated in Clark’s hobbies like fishing and hunting and was not afraid to get down and dirty in the process. They also shared a love for practical jokes and constantly tried to one-up each other.
Their first public outing was Clark’s good friend and colleague Jean Harlow’s funeral. Their bosses were furious. Since Clark was officially still married, it was inappropriate for them to go out as a couple. The press started writing about them and Clark asked Ria for a divorce. She would only agree for a large sum of money, so Clark borrowed the amount from his studio MGM. They agreed, on the condition that Clark had to star in Gone With The Wind. On 8 March 1939, Clark and Ria were officially divorced and 21 days later Clark and Carole got married. They did not want to make it an event, so the pair eloped and only took Clark’s press officer Otto Winkler with them.
The couple made a home in an elaborately restored farmhouse.  They had horses, dogs and chickens and even attempted to sell eggs. 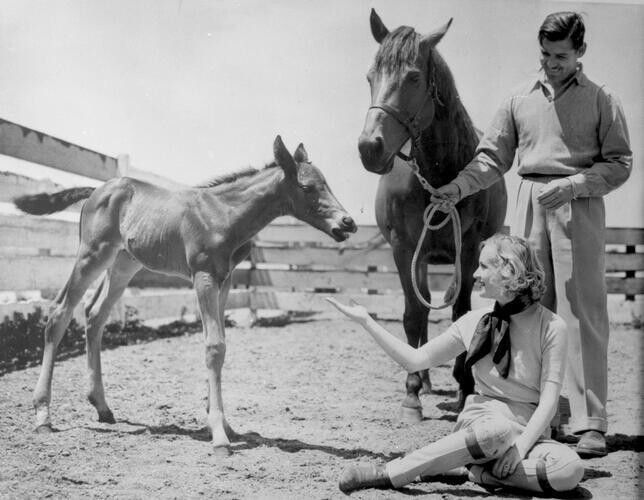 With Carole’s guidance Clark became more social and the pair hosted popular dinner parties for friends. They called each other ‘Ma’ and ‘Pa’ and thoroughly enjoyed married life together. But all was not as perfect as the press made it seem. Clark was a womanizer at heart and cheated on Carole. Another problem was that Carole wanted to have a baby, but miscarried early in their marriage. Despite their problems the two were crazy about each other. Carole even started working less so she could spend more time with Clark.
By 1940, World War II was in full swing and Carole felt very passionate from the get-go about helping out in any way she could. She announced to her studio that she refused to make any more movies and was joining the Red Cross. At the beginning of 1942, Carole was asked to go on a war-bonds promotion tour, as she was a beloved star who could help raise money. Her mother accompanied her along with Clark’s press officer and good friend Otto Winkler. Clark himself was still filming and had to stay in California. The peak of the tour was in Indianapolis on January 15th, where Carole signed war bonds for hours and ultimately raised over two million dollars. 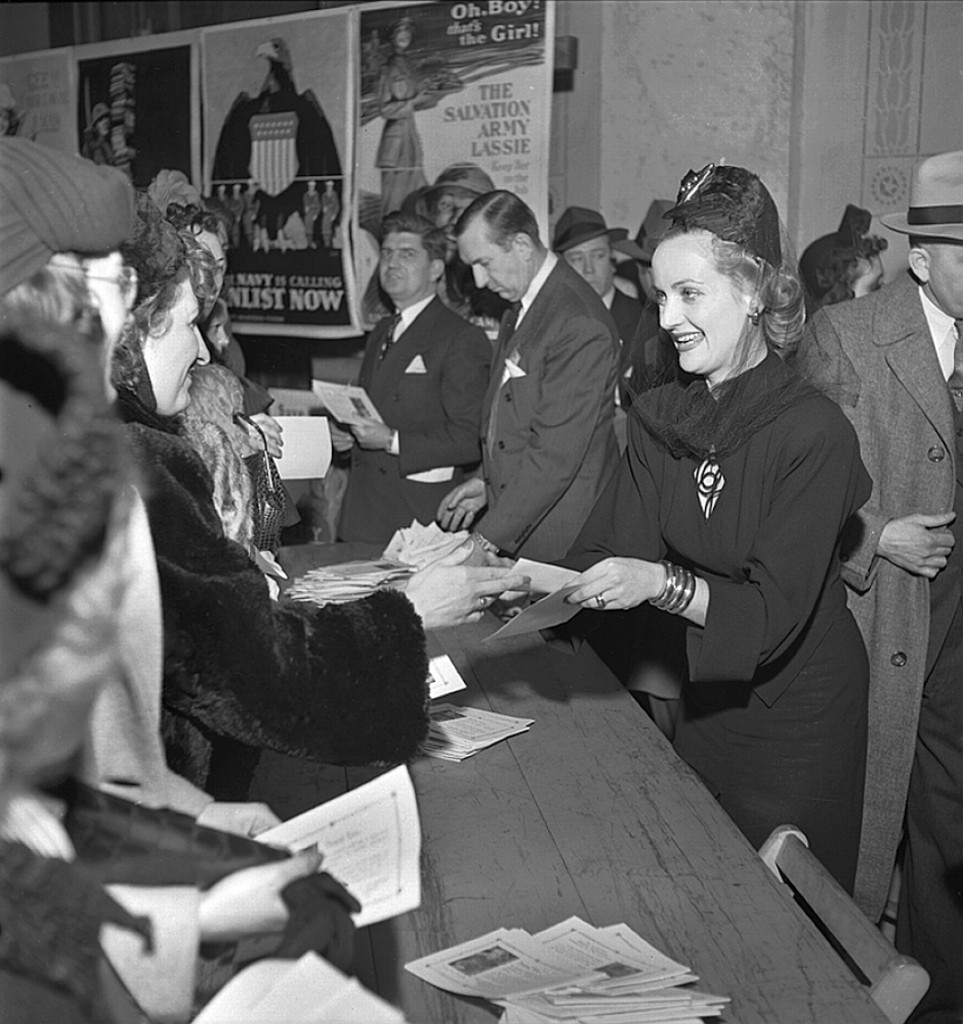 The three were scheduled to return to Los Angeles by train, but Carole wanted to be back home quickly so they took a plane instead, even though her studio advised her not to do so. Lure has it that her mother and Otto did not want to fly and were terrified. Carole and Otto supposedly flipped a coin for it and Carole won.
What we know for sure is that on the early morning of January 16, 1942, the three boarded a plane with Army personnel. The flight diverted to refuel in Las Vegas and at 7:20 pm the plane crashed into Potosi Mountain. There were no survivors. The recovery of the bodies took three days because of the snow and harsh terrain. The first on the scene quickly spread word that Clark shouldn’t go up the mountain because it was a horrible site to see. The victims were impossible to identify, but personal artifacts were scattered and a diamond and ruby ear clip that Clark had given Carole for Christmas was found nearby. He had it set in a locket and wore it for years to come. On January 21 Carole was buried next to her mother. Since she was the first war-related female casualty the U.S. suffered, she could have had a military funeral, but Clark made sure it was a simple and private ceremony, just like Carole always wanted.

Friends, family and even the press all said the same thing: after Carole passed away, Clark was never really the same. He was heartbroken over her death and wandered around their house for weeks. Although they had been thinking of selling their home when she was still alive, Clark continued to live in the house until his death. He claimed her spirit would still be there if he stayed.
Clark was depressed and had lost twenty pounds since the tragedy, but after completing his film Somewhere I’ll Find You, he defied his studio bosses and joined the army. 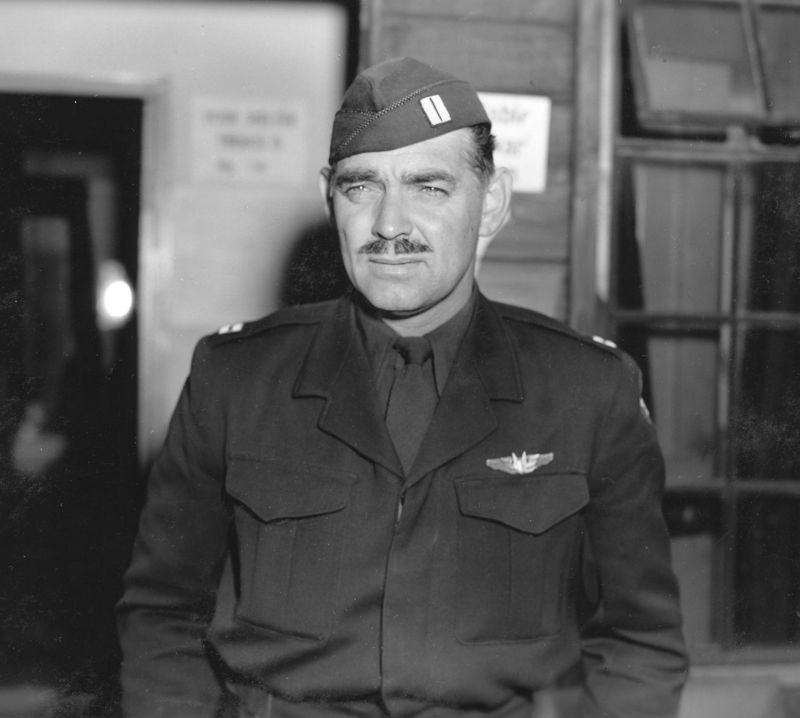 Carole had wanted him to do so and according to his army buddies he did not seem to care whether he survived or not at this point. He left the army with the rank of Captain and picked up his life. He started acting again and dated several women. Still, he seemed to look for her in the women he dated and his already high alcohol intake increased after Carole’s death.
In 1949 Gable married Lady Sylvia Ashley, but it was not a happy marriage and the pair divorced in 1952. In 1955 he found love again and married Kay Spreckles. They were happy together, but Clark’s health was declining. On November 16, 1960 he passed away of an arterial blood clot, ten days after he had suffered a heart attack. He was buried next to Carole, as he had wanted.