They met while playing Cleopatra and Mark Antony, not knowing they would become famous lovers themselves. Elizabeth Taylor and Richard Burton are still known for the passionate, all-consuming love they had for each other. So passionate was their love, it eventually drove them apart.
Classic Hollywood Central takes a look at some of Classic Hollywood’s real life love stories and of course this iconic couple cannot be left out.

‘You’re much too fat, luv. But you do have a pretty little face’, were the surprising first words Richard Burton uttered to Elizabeth Taylor when they met on the set of Cleopatra in 1962. Naturally, Elizabeth was not too impressed and she hurried to her then-husband Eddie Fisher. Elizabeth and Eddie had been married for five years, but their marriage had never been perfect. Six years earlier Elizabeth’s third husband Mike Todd had died in a plane crash, leaving her devastated. Eddie was his best friend and consoled the young widow. Though Eddie was married to actress Debbie Fisher at the time, a romance blossomed and a year later Elizabeth and Eddie married. Richard was a married man as well: he had been married to actress Sybil Williams for years and they had two daughters. He was a known womanizer though and Sybil accepted this. 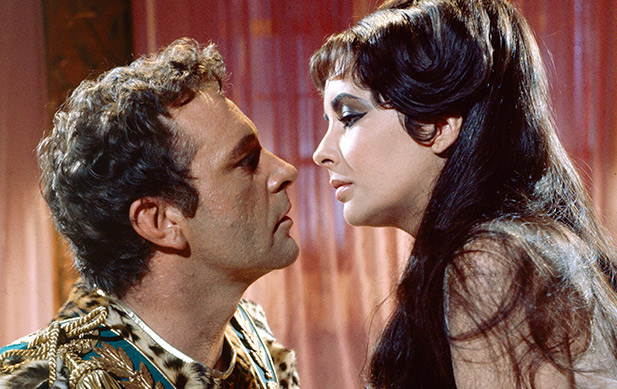 According to Elizabeth she first felt a strong connection to Richard when he turned up drunk at rehearsal. His hands were shaking so badly he couldn’t sip his coffee, so Elizabeth held the cup for him and at that moment she knew there was something there. Their spouses had no idea something was brewing on set. Elizabeth, who already had three children, was even in the process of adopting a baby girl named Maria with Eddie Fisher. But soon enough it was apparent to everyone that the two were having an affair. They secretly snuck off on set to be together and they kept going during kissing scenes, even after the director had yelled ‘cut’.
The press found out about their affair quickly and it was all over the papers. Their spouses tried to deny it for awhile, though Richard made that very hard for Eddie Fisher by taunting him with it. Soon their respective marriages were over. It quickly turned into a huge scandal and even the Vatican denounced their relationship as ‘erotic vagrancy’. The public condemned them as well and it was especially hard on Elizabeth who couldn’t go out in public without people shouting at her that she was a ‘bad mother’ or worse.
But the couple was so in love, they did not let other people’s opinion get in their way. They were like two teenagers together, giggly and affectionate. Yet, even at the beginning, their fights were legendary. Elizabeth had quite a temper and Richard liked to drink and did so often. The results were violent arguments and fights, with Elizabeth sometimes threatening to take her life and Richard getting physical with her every now and then. Elizabeth’s children liked Richard though and he legally adopted her two youngest daughters Liza and Maria. 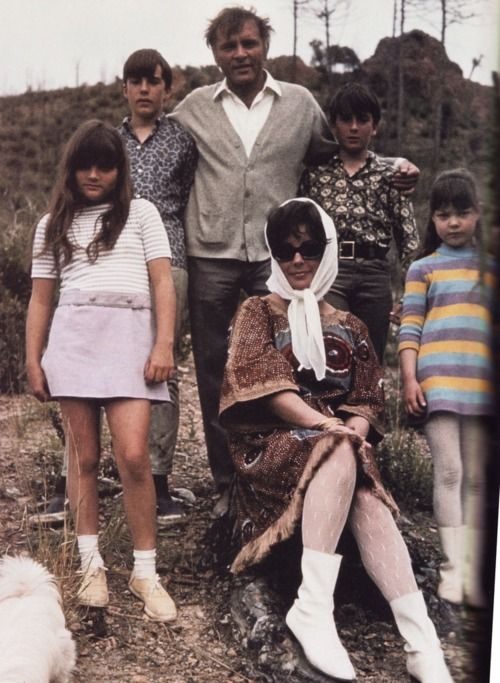 The couple started working together as well, they filmed their most successful feature together in 1966: Who’s Afraid of Virginia Woolf?. They also made some films together that were huge flops, like Boom! And The Sandpiper, but they got paid well. That was important to them because they definitely needed the money to maintain their glamorous lifestyle. They both loved luxurious vacations, nice houses, boats and art. And as we all know, Elizabeth was fond of diamonds and Richard was fond of giving them to her. They even have their own diamond named after them: the Taylor-Burton diamond that Richard gave her in 1969.
During the end of the sixties pills and alcohol were abound in the Taylor-Burton household. Richard took sleeping pills for his insomnia and Elizabeth took pain killers for the chronic pain in her back. They both consumed a lot of alcohol as well and seemed to inspire each other to drink more. This resulted in even more fights. When they made their last film together, Divorce His, Divorce Hers in 1973 the title turned out to be ironic, as they released a statement announcing that they had separated.
But even during their divorce they couldn’t stay away from each other. When Elizabeth was in the hospital because of a cyst, Richard rushed to her side and when Richard sent her a letter saying he wanted to see her, she rushed to his side. They were also bound together by their children, Richard was even Best Man when Elizabeth’s oldest son got married during this time. So nobody was really surprised when Richard and Elizabeth realized they couldn’t be without each other and got re-married in October, 1975. 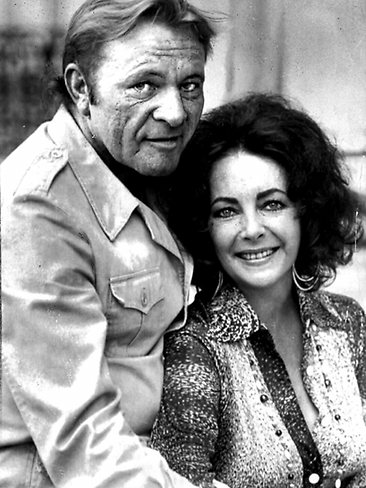 But they stayed in the same pattern, fighting and making up. 50-year old Richard tried to stop drinking and was tired of all the drama in their relationship. So when he met the calm and stable 27-year old Suzy Hunt he realized he wanted to be with her and that his marriage to Elizabeth was over. They divorced after ten months of marriage. Three weeks later Richard was married to Suzy and Elizabeth soon met her next husband John Warner.

Elizabeth and Richard remained in touch after their divorce, but not extensively so. As with their marriages, the aftermath was not smooth sailing though. In 1983 Elizabeth decided she wanted to do a stage production of Private Lives with Richard and he agreed. Both were involved with other people, but Elizabeth seemed eager to get back together with Richard. But even though he loved her, he had moved on. On top of that Richard was trying to quit drinking again, while Elizabeth was getting more and more dependent on alcohol and medication. 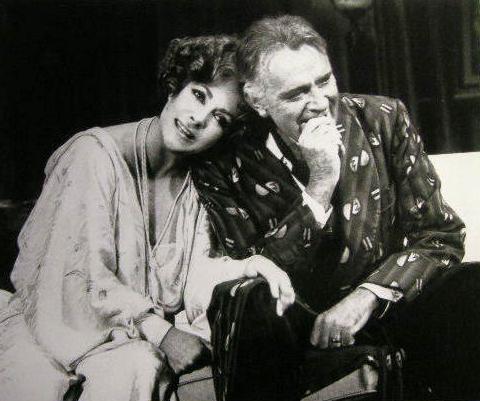 She arrived late often and did not always remember her lines, he was annoyed with her and flaunted his relationship with the much younger Suzy Hayes. It was a recipe for disaster and the reviews were not kind.
Richard married Suzy during this time, according to some simply to send a message to Elizabeth. Elizabeth was heartbroken. A couple of months later Elizabeth was admitted to the Betty Ford Clinic. Part of her therapy there was to make peace with her past and afterwards she spoke to Richard on the phone every once in a while and they even met up with their respective partners in London.
On 5 August 1984 Richard died suddenly of a brain heamorrhage, he was 58. Elizabeth received the news a day later and was devastated. She did not attend his funeral because his widow Susan did not want the media to turn it into a circus.
Until the day she died Elizabeth maintained that Richard Burton and her third husband Mike Todd were the loves of her life. In her last interview she said that if Richard had not died it would have been ‘inevitable’ that they had gotten married again. She passed away on 23 March 2011 at the age of 79. 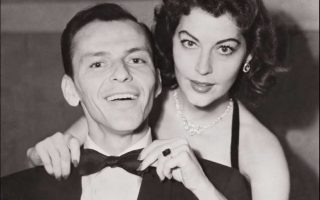