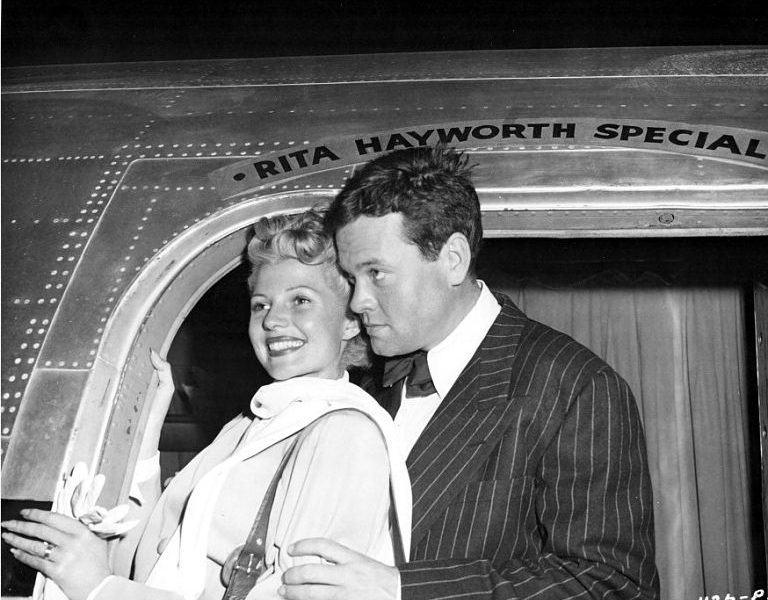 Rita Hayworth was the glamorous movie star and Orson Welles the brilliant director. For awhile, they were the perfect match. Although their relationship didn’t last, they never stopped loving each other. Classic Hollywood Central takes a look at some of Classic Hollywood’s real-life love stories and continues this journey with the story of Rita Hayworth and Orson Welles.

In 1941, director Orson Welles was frustrated about the difficulties surrounding the filming of his next picture: The Magnificent Ambersons. Flipping vigorously through Life Magazine, he suddenly stopped when he caught a glimpse of a pin-up picture of actress Rita Hayworth. Mesmerized, he started to call Rita, begging her to go out with him. She refused multiple times, before relenting and agreeing to a dinner. There, she fell in love with him.
Rita was in the middle of divorcing her first husband Edward Judson, a dominating man twice her age. She was in the prime of her career, having appeared in popular musicals with Fred Astaire and having been chosen as the unofficial pin-up for American World War II soldiers. Orson was in his prime career-wise as well, having just released the classic Citizen Kane. He had also been married before, to actress and socialite Virginia Nicolson, and had a daughter. Orson was an intelligent man and he listened to Rita and tried to understand her. The insecure Rita, who had been used as an object to make money off by both her father and first husband, liked talking to him and they confided in each other about their rough upbringings. He taught her about philosophy, literature and the theatre. Rita loved taking care of Orson and reveled in their romance. 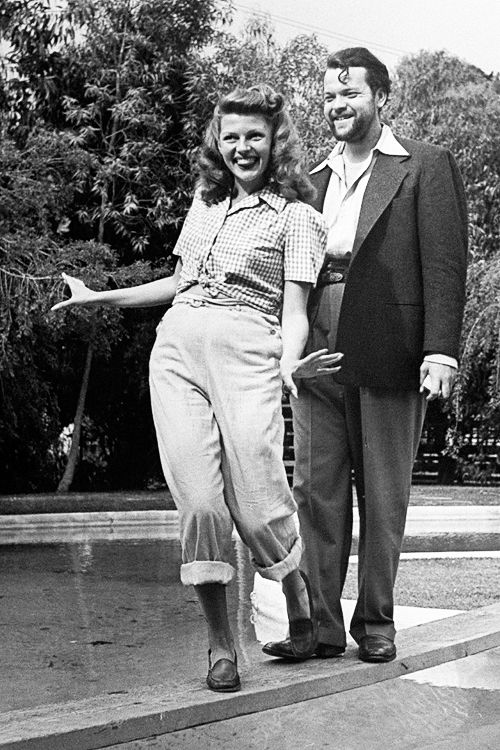 Since they both worked in the industry, it wasn’t long before they started working together. Rita appeared in guest spots for Orson’s Mercury Theater Radio Show and together they entertained the American troops with a magic act. On September 7, 1943 Rita left the set of the movie Cover Girl with her make-up still on, jumped in the car with Orson and headed for Las Vegas. The pair got married there in secret, knowing that Rita’s studio boss Harry Cohn wouldn’t be happy that ‘his’ star was getting married with the difficult director. The press however, loved Rita and Orson together and dubbed them ‘The Beauty and the Brain’. The two were madly in love and soon Rita was pregnant. They were over the moon and on December 17, 1944 their daughter Rebecca was born. The pair bathed in domestic bliss for a short while and quickly got back to work. 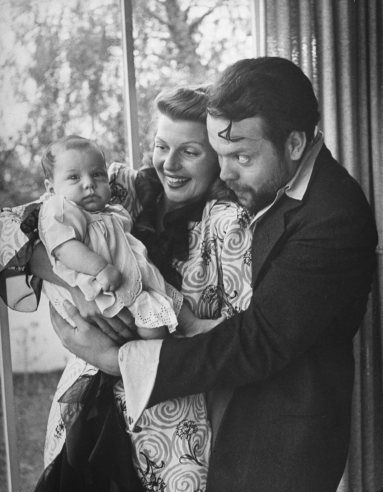 Rita attained superstar status through her role in Gilda, but was increasingly unhappy at home. Orson was a moody man who was obsessed with his work. Rita was proud of her work, but wanted nothing more than a happy marriage. She needed someone she could trust who would provide a shoulder to lean on. Orson found her clingy and responded by becoming more and more distant. Rita was willing to work on their marriage until she started to suspect that he was cheating on her. Orson was seeing other actresses, like Judy Garland, and prostitutes on the side and Rita had had enough and left him.
But Orson was no good with money and desperately needed some income. Because of his bad financial advice to Rita, she was in the same boat. So they teamed up to make a film together: The Lady From Shanghai. Orson convinced Rita to move back in with him, but the damage had been done. To the public, The Lady From Shanghai seemed to be Orson’s revenge on Rita for leaving him. He had dyed her signature red hair blonde and the film seemed to be about hate rather than love. On November 10, 1947 the couple divorced. 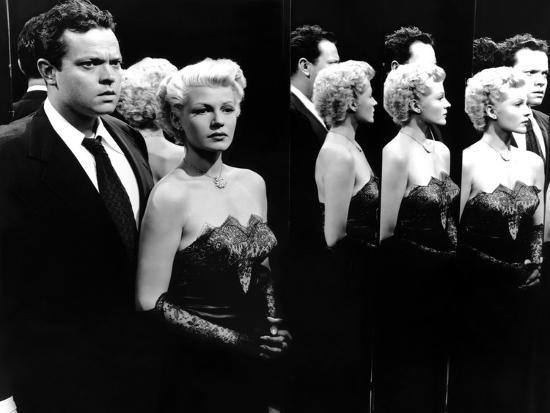 After their marriage, both Rita and Orson were headed towards chaotic times. Despite creating some critically acclaimed movies and being seen as a genius, Orson struggled financially his whole life. Because of this, he left many self-financed projects unfinished. He married actress Paola Mori in 1955 and together they had daughter Beatrice. But the pair separated during the final years of his life and he spent those years with his mistress of twenty years, actress Oja Kodar.
Rita went on to marry Prince Aly Khan in 1948 and they had daughter Yasmine together. After their divorce they were embroiled in a custody battle. She had two short lived marriages with Dick Hames and James Hill. Through it all, she was plagued by health problems and inexplicable rage. People around her attributed this to her worsening alcohol problem, but in 1981 she was diagnosed with Alzheimer’s disease. Her daughter Yasmine moved in with her and took care of her until her death.
The relationship with their daughter Rebecca declined over the years, for both Rita and Orson. After her graduation and wedding, Rebecca struggled financially and blamed her parents for her troubled upbringing.

Although Orson did arrange for a Jim Bean add campaign together so they could both make some money, he barely spent time with her. Rebecca only spoke to Rita sporadically.
A few years before Rita’s death, Orson saw her at a party and went up to her. It took her four minutes to remember who he was and she subsequently burst into tears. In the final years of his life, Orson told interviewers that Rita was ‘the dearest and sweetest woman that ever lived’ and that he would have stayed with her until she died.
Orson passed away on October 10, 1985 following a heart attack. Rita passed away on May 14, 1987 from complications of Alzheimer’s disease. 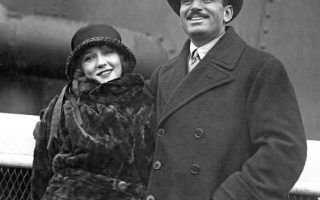 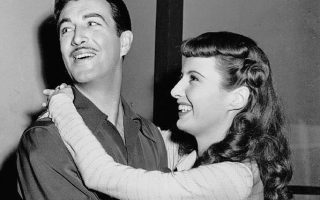