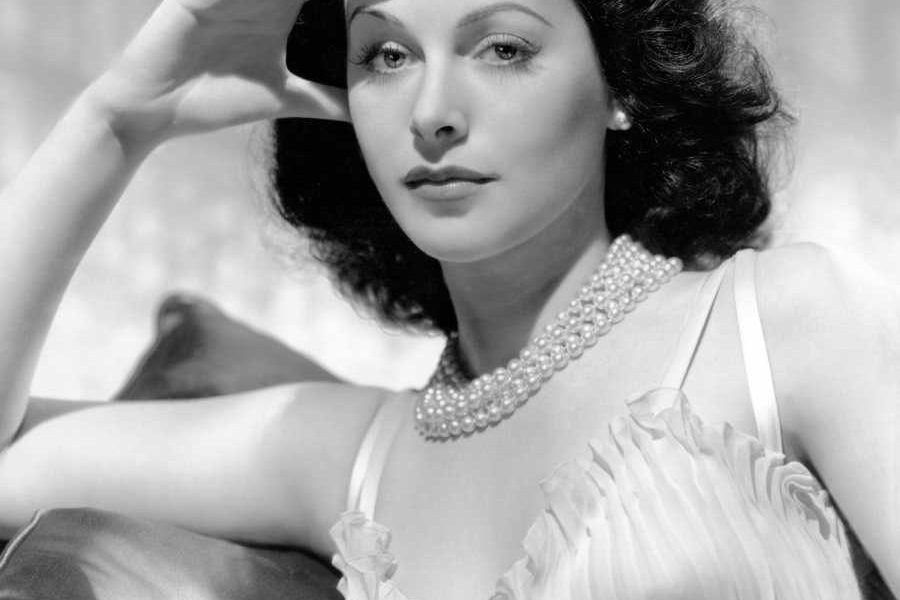 Her first husband Fritz Mandl reportedly tried to buy up all the copies of her film Ecstacy, so that nobody would see the nude- and sex scenes. He was unsuccessful and even Benito Mussolini is said to have boasted about having a copy in his possession.

Studio boss Louis B. Mayer claimed to have come up with the last name Lamarr, as an ode to actress Barbara La Marr, who was known as ‘the girl who was too beautiful’. Hedy herself always said that shé came up with it, naming herself after ‘la mer’ which means ‘the sea’ in French.

When she first arrived in Hollywood, Hedy was very lonely. Writer F. Scott Fitzgerald saw her in a restaurant by herself and said to his girlfriend: ‘How typical of Hollywood, the most beautiful girl in the world alone on a Saturday night’.

Her looks were so popular, that Hedy’s profile was the most requested by women to their plastic surgeons in the 1940’s.

Her ‘frequency hopping’ invention, that is used for Wi-Fi and Bluetooth, is now worth $30 billion. She never saw a penny of it because her patent had expired when the invention was picked up.

She was the inspiration for the comic book character Catwoman.

Hedy was a big believer in astrology. She was a Scorpio and she once refused to meet a friend’s husband because he was a Gemini. She got along splendidly with him when they finally met.

She owned the Schloss Frohnberg Palace in Austria when its exterior was used for the filming of The Sound Of Music.

Hedy considered her performance as Delilah in the film Samson and Delilah to be her best.

She was very litigious. One of the lawsuits she filed was against Mel Brooks for using her name in Blazing Sadles. They settled out of court and Brooks said he was flattered by her attention.

In her final years, Hedy said that her father was the love of her life and her children were her greatest accomplishment.

She left no money to her adopted son James, but left most of her $3,3 million to her two biological children. He sued the estate and eventually settled for $50,000.

The very first Inventor’s Day in Germany was held in her honor on her birthday November 9, 2005.