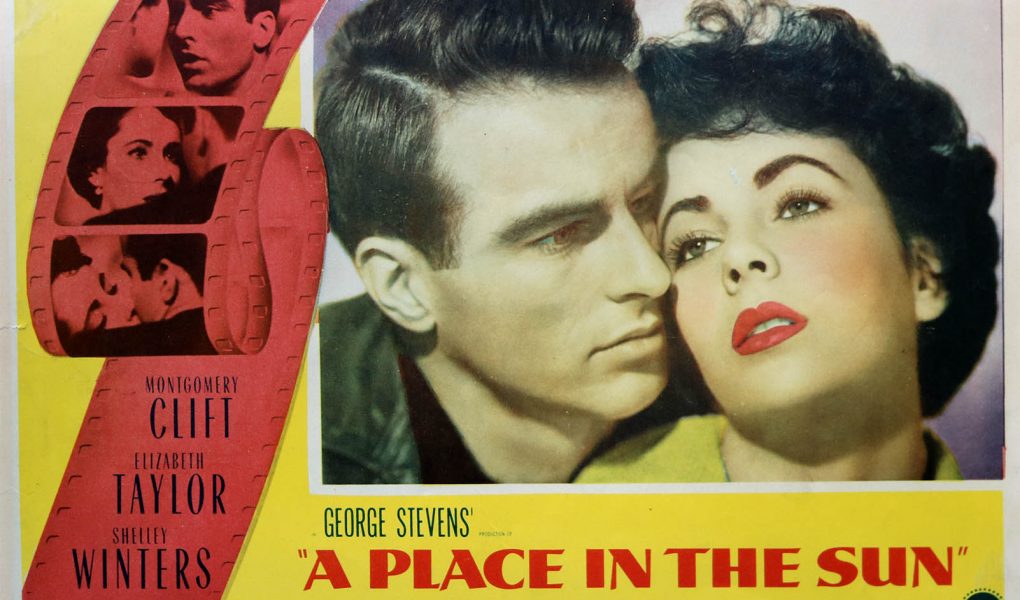 Description:
The poor George Eastman (Montgomery Clift) gets a chance to prove himself by working in his rich uncle’s factory. While there, he starts dating co-worker Alice (Shelly Winters). When his uncle rewards his good work by inviting him to one of his high society parties, he meets socialite Angela (Elizabeth Taylor). The two fall in love and drama ensues when he has to choose between the two women….

The original trailer of A Place in the Sun:

-A Place in the Sun was based on the 1925 novel An American Tragedy by Theodore Dreiser. It had unsuccessfully been turned into a film under the same name in 1931, so the name was changed for the 1951 version.

-Both Audrey Totter and Gloria Graham were asked to play the role of Alice, but their studios refused.

-Director George Stevens told Shelley Winters was too sexy for the role of Alice. So she dyed her hair a mousy colour brown, put on dowdy clothes and sat in the corner of the waiting room during the audition. Stevens did not even recognize her and when he finally realized who she was, he offered her the part.

-18-year old Elizabeth Taylor was still known as a child actress when she took the role of Angela. She later said that A Place in the Sun taught her what acting really was. After the success of the film, Elizabeth was a bonafide star and her name would get title billing on every movie she did afterwards.

-Although Elizabeth initially felt intimidated by method actor Montgomery Clift, the two developed a deep friendship that would last until his death.

-Montgomery Clift was such an intense method actor, that he was drenched in sweat after a day’s shooting as George. He told Elizabeth: ‘that’s the worst part about acting, your body doesn’t know you’re acting. It sweats and makes adrenalin just as though your emotions were real.’

-Charlie Chaplin considered A Place in the Sun ‘the greatest movie ever made about America’.

-The set of Sunset Boulevard, who had the same art director, was used for the interior of the Eastman mansion. Norma Desmond’s staircase can be seen during the party scene.

-Director George Stevens played the music score of the film between takes, to keep the actors in the right mood.

-Elizabeth Taylor’s ‘white lilac’ gown became a fashion sensation after the release of the film.

At the time, A Place in the Sun was a daring film with plenty of social commentary. It shows the wide gap between the poor and wealthy, the struggle to get ahead in society and what people are willing to do to get to the top. The scene where Alice goes to the doctor and asks for an abortion was especially controversial and almost did not make it through the strict censorship. This day and age, A Place in the Sun is not that controversial anymore. Economic inequality and obsession with money and status are well documented topics in today’s culture. Still, A Place in the Sun was one of Classic Hollywood’s finest efforts in tackling these topics. The fact that it was based on a real life crime (the murder of Grace Brown by social climber Chester Gillette) gives it even more significance.
But the wonderful acting is the real showstopper. The film shows Montgomery Clift and Elizabeth Taylor at their best and their chemistry lights up the screen. Shelley Winters was so impressive as the downtrodden Alice, that she could not shake the character and found herself being typecast. Not to be forgotten are the set and costume design, which make the film a pleasure to watch.
A Place in the Sun was a huge success at the time of its release and movie fanatics still hold the film in high regard. Director Mike Nichols even said that A Place in the Sun was his biggest influence during the making of The Graduate. In 2013 The British Film Institute re-released the film because of its ‘significant merit’.