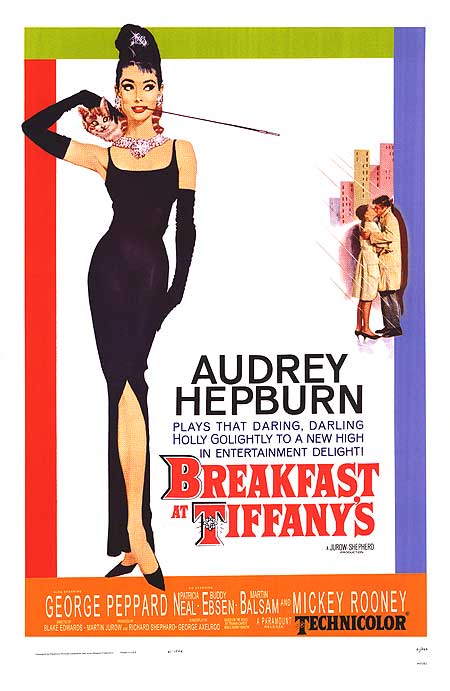 In Breakfast at Tiffany’s a struggling writer Paul Varjak (George Peppard) moves into an apartment in New York in the early 60’s. He becomes fascinated by his neighbor, the bubbly Holly Golightly (Audrey Hepburn). Holly is a charming, quirky socialite who spends her time going to high-class parties and escorting wealthy men. She lives in a nearly bare apartment with a nameless cat. Paul and Holly develop a friendship that is about to turn into a romance when an old friend of Holly returns to the scene, revealing the truth about Holly’s past.

The original trailer of Breakfast at Tiffany’s:

–          Breakfast At Tiffany’s was loosely based on a novella by Truman Capote. The book was quite risqué and some scene’s were considered inappropriate for the movie. For instance, Holly Golightly is a call girl but this is never mentioned in the movie.

–          Truman Capote wanted Marilyn Monroe to play Holly Golightly. But when drama coach Lee Strasberg told Marilyn that playing a prostitute would be bad for her career, she turned it down. Capote was furious when Audrey Hepburn was hired and said he was ‘double crossed’ by the studio.

–          Tiffany’s opened its doors on a Sunday for the first time since the 19th century so that filming could take place inside the store.

–          The song ‘Moon River’ was composed especially for Audrey Hepburn by Henry Mancini. It was tailored to her limited vocal range. Although there have been many versions of the song, Mancini said Audrey’s was his favorite.

–          Audrey Hepburn felt uncomfortable playing Holly Golightly, because she couldn’t identify with her. ‘I’m an introvert. Playing the extroverted girl was the hardest thing I ever did’, she said.

–          Audrey Hepburn’s salary for the film was $750,000, making her the second highest paid actress (behind Elizabeth Taylor, who was paid one million for Cleopatra) per film at the time.

–          Mickey Rooney’s part as Mr. Yunioshi is notorious. Rooney wore make-up and a mouthpiece to make him look Asian. It was meant to be a comedic caricature, but is considered by some as racist. Rooney, the producer and the director have since apologized.

–          Before George Peppard was cast as Paul Varjak, Steve McQueen and Tony Curtis were in the running to play the part.

–          George Peppard was a Method actor, who had his own ideas on how to play Paul Varjak. Because of that, he and director Blake Edwards did not get along. 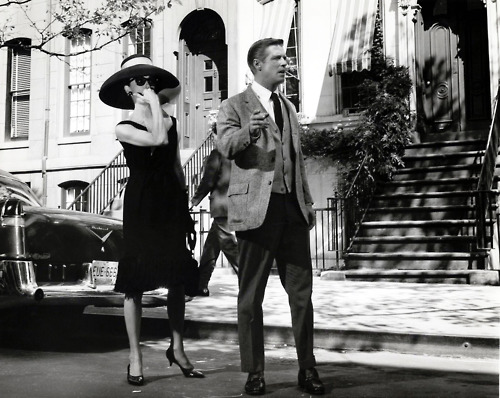 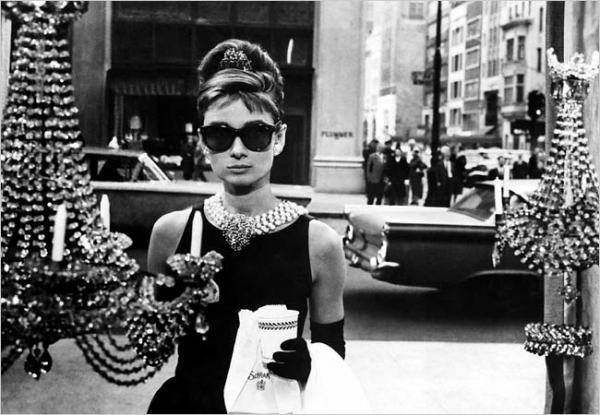 Breakfast at Tiffany’s is considered a classic and is still very popular all over the world. Although Audrey Hepburn had a long career and played many memorable roles, it is her portrayal of Holly Golightly that she is most known for. It also rejuvenated the career of Buddy Ebsen. It was his role as Doc Golightly that lead directly to his role as Jed Clampett in The Beverly Hillbillies.
Breakfast at Tiffany’s is not only an iconic movie in the movie industry but in fashion as well. Holly’s look in the movie is seen as one of the most fashionable in cinematic history. The image of her carrying an oversized cigarette holder and her look in the opening scene are iconic and are still seen on many pieces of merchandise. The black dress that Givenchy made for the movie still tops polls around the world as the most famous female screen outfit. One of the three dresses that were made was sold at a London auction in 2006 for no less than 467,200 pounds.