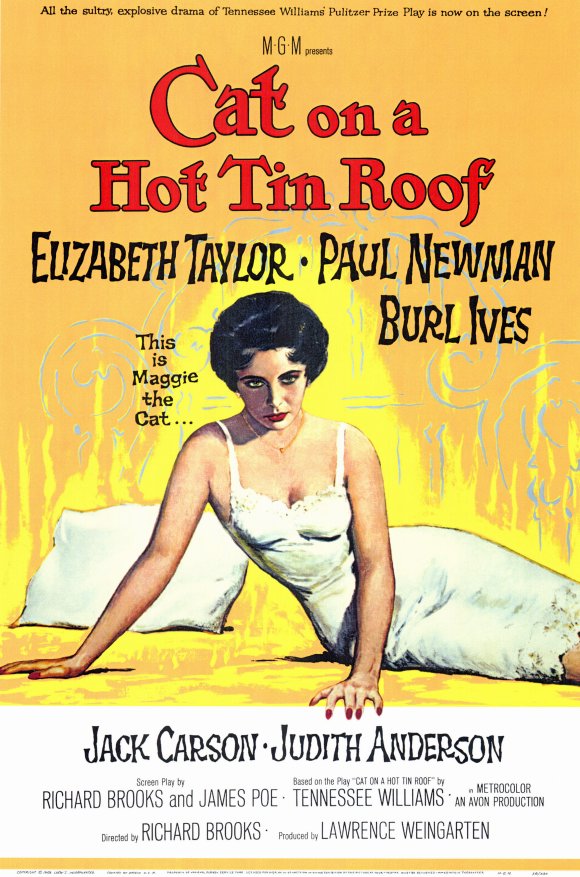 In Cat on a Hot Tin Roof Brick Pollit (Paul Newman) is a troubled ex-football player and alcoholic who ignores his frustrated wife Maggie (Elizabeth Taylor). Their reunion with his extremely wealthy father Big Daddy (Burl Ives), who is dying of cancer, results in fights and revelations within the family.

The original trailer of Cat on a Hot Tin Roof:

–          The film is based on a play by Tennessee Williams. But the film contains almost none of the homosexual themes of the original play and diminished the play’s critique of homophobia and sexism. This had to be done because of the censorship of the Hays Code that reigned over Hollywood in those days. But this caused Tennessee Williams to say to people in the queue at the movietheater: ‘This movie will set the industry back 50 years. Go home!’

–          Tennessee Williams said that Elizabeth Taylor was ‘never my idea of Maggie the Cat’.

–          Lana Turner and Grace Kelly were both considered for the part of Maggie.

–          Paul Newman was under the impression that the film would follow the storyline of the play and expressed his disappointment when this turned out not to be the case.

–          Burl Ives and Madeleine Sherwood repeated the roles they had originated on Broadway in 1955.

–          Cat on a Hot Tin Roof was to be filmed in black and white but director Richard Brooks insisted on shooting the film in color once Paul Newman and Elizabeth Taylor were cast. He was aware of the public’s enthusiasm for Elizabeth’s violet and Paul’s blue eyes.

–          Tennessee Williams wrote the part of Big Daddy with Burl Ives in mind, even though he was primarily known as a folk singer at the time.

–          Burl Ives was only one year older than Jack Carson, who plays his eldest son, and 16 years older than Paul Newman, who played his youngest. 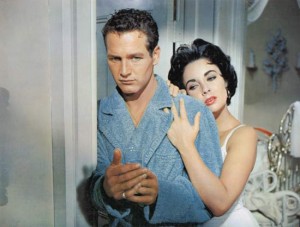 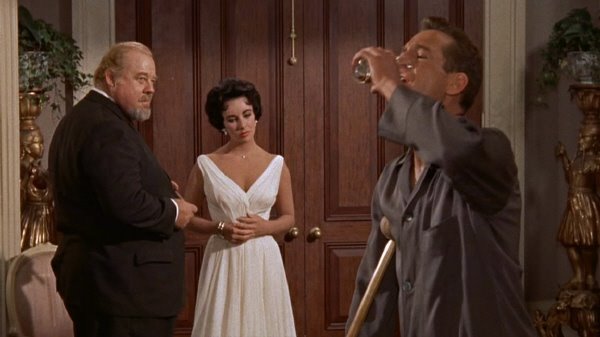 Cat on a Hot Tin Roof is still a popular classic today. Not in the least because of its two leading stars Elizabeth Taylor and Paul Newman, who both give great performances. According to many, Cat on a Hot Tin Roof propelled these two icons, admired for both their beauty and acting skills, into stardom.
Cat on a Hot Tin Roof is still relevant because of the timeless themes of family issues, alcoholism and its subtle portrayal of homosexuality and the struggle that often accomponies it. Although Tennessee Williams fans are sometimes annoyed that the film seems to avoid the subject of Brick’s homosexuality, which is much more strongly suggested in the play, some movie buffs feel that it gives the film an extra dimension. Because it fits into the feel of the particular time and the particular culture of the story. Just as homosexuality was taboo at the time, so it was in the film.

Read all about Elizabeth Taylor’s life or about Paul Newman’s life.