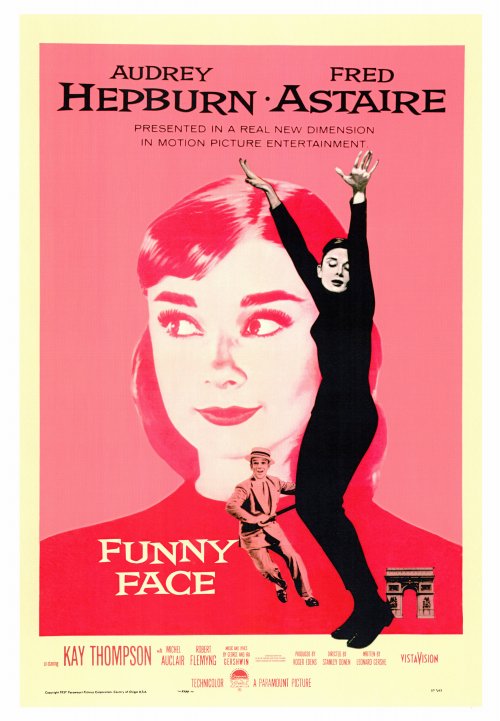 In Funny Face fashion photographer Dick Avery (Fred Astaire) is on a quest to find a new model, when he runs into bookstore clerk Jo Stockton (Audrey Hepburn). He takes her to Paris and transforms her into the newest supermodel. But it does not take long for Dick to fall in love with his new discovery.

The original trailer of Funny Face:

–          Dancer/actress Cyd Charisse was offered the part of Jo Stockton first, but she declined.

–          The character of Dick Avery is based on famous fashion photographer Richard Avedon. Avedon even did most of the photography for the film, including the famous face portrait of Audrey Hepburn that is unveiled in the dark room sequence.

–          The character of Jo Stockton is inspired by Suzy Parker. She has a small cameo in the film in the Think Pink sequence.

–          Audrey Hepburn would not take this role, unless Fred Astaire was cast as her co-star. When this happened, she turned down the lead in Gigi to star in Funny Face.

–          Audrey Hepburn had had extensive dance training when she was younger and had always wanted to be a ballerina. This was the first and only film of hers where she could finally use her dancing skills.

–          Ditzy model Marion is actually played by real-life model Dovima, one of the top models at the time who often worked with Richard Avedon.

–          Shooting Funny Face was a family affair for Audrey Hepburn. Her mother had a walk on part, her dog is also seen in the film and her husband Mel Ferrer was shooting a film in Paris at the same time as well.

–          Funny Face was reportedly Audrey Hepburn’s favorite of all her films. 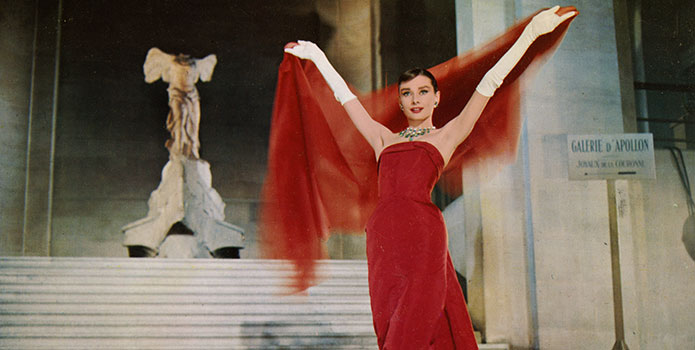 Although Funny Face was initially a box-office disappointment, the studio reissued it in theatres in 1964 to follow the success of My Fair Lady. Crowds of Audrey Hepburn fans went to see it and it finally made a huge profit. Today it is most famous for being one of the most fashionable films of Hollywood’s Golden Age. Since Funny Face is loosely based on the real fashion industry and had the cooperation of big names like Richard Avedon and was filled with clothes by Edith Head and Hubert de Givenchy, it truly deserves its fashionable reputation. Some of Audrey Hepburn’s most famous pictures and looks are from Funny Face.
The storyline may be lighthearted, but it’s the casting of two of Hollywood’s greatest stars, Audrey Hepburn and Fred Astaire, that brings the film to another level. These two beloved icons loved working together and it shows. Audrey Hepburn thoroughly enjoyed showing her dancing skills in this musical, which is a joy to see. But, most notably, the feel-good factor of Funny Face is undeniable.