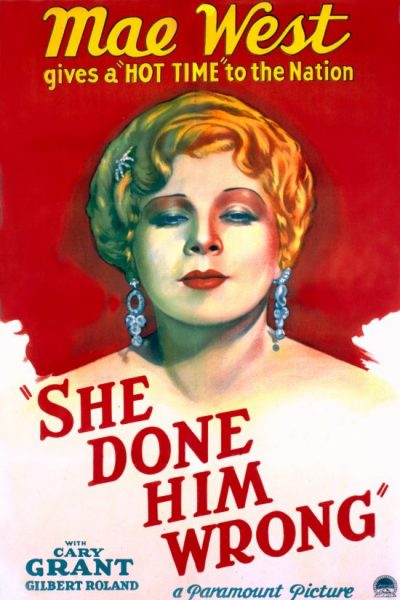 In She Done Him Wrong Lady Lou (Mae West) is a singer in a Bowery barroom salon in New York in the 1890’s. She’s a bawdy, seductive woman with a lot of admirers. One of them is her boss Gus (Noah Beery) who showers her with diamonds. What Lou does not know is that Gus is a criminal and things are about to get messy. Meanwhile a federal agent (Cary Grant) is posing as a city mission director, but it gets complicated when he falls for Lou….

The original trailer for She Done Him Wrong:

–She Done Him Wrong was adapted from the successful Broadway play Diamond Lil, which was written by none other than Mae West herself.

-The original play was known for its racy content. So, when Paramount bought the rights to the play in 1931, they spent the next two years trying to figure out how to get the material past the censors.

-The National Legion of Decency was formed six months after the release of She Done Him Wrong. Legion officials cited the film and Mae West as one of the major reasons for the ‘necessity’ of the organization.

-The film was shot in only three weeks.

-Mae West’s costumes were so tight that she had to be sewn in to most of them.

–She Done Him Wrong is credited as being Cary Grant’s big break. Mae West personally chose him for the film and also cast him in her next film No Angel.

-Mae West always made it a point to act with African-American actors and actresses, trying to help break racial discrimination in entertainment. At the time this was still very controversial, especially on stage. In She Done Him Wrong she brought African-American actress Louise Beavers aboard.

-The censors in Australia, Austria and Finland rejected the movie. It was also banned in Atlanta.

-This is the only Mae West movie to receive an Oscar nomination.

–She Done Him Wrong is credited with saving Paramount Pictures from bankruptcy. 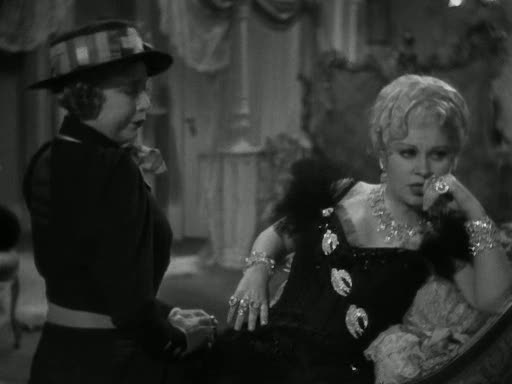 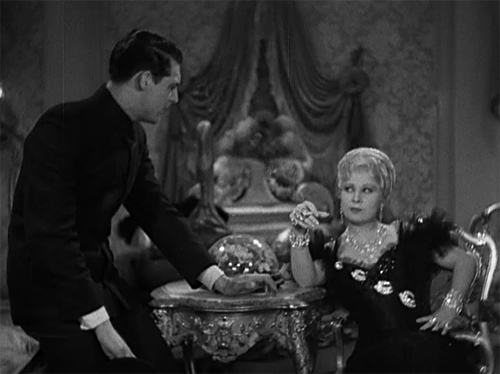 She Done Him Wrong was Mae West’s big break. And it came with a bang: her self-written story was so bawdy and racy, it’s credited with bringing about the strict censorship that would rule Hollywood for the next few decades. But the film did more than just that, it also made Mae West a household name and saved studio Paramount from bankruptcy. The studio was so thankful, they named a building on the studio lot after her.
She Done Him Wrong is a classic feature and has worked its way into pop culture. Innuendos like ‘Is that a gun in your pocket or are you just happy to see me?’, turned into classic quotes that are still used today. Pretty much all the credit for the film goes to Mae West, who’s attitude and sharp sense of humor is all over She Done Him Wrong. Moreover: she wrote the story, played the lead and cast talented newcomers like Cary Grant.