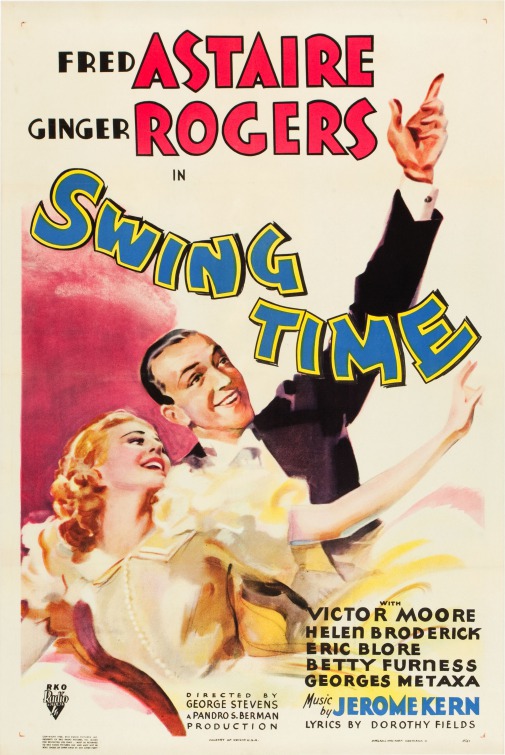 In Swing Time John ‘Lucky’ Garnett (Fred Astaire) is a gambler and a dancer who is set to marry Margaret (Betty Furness). But when he loses all of his money in a bet, Margaret’s father tells him he must earn 25.000 dollars to show his good intentions. Lucky goes to New York and becomes acquainted with dance school instructor Penny (Ginger Rogers). They start dancing together to get an audition in hopes of earning a contract to perform at a club. But Lucky and Penny start to fall for each other, just as Margaret is on her way to see Lucky.

The trailer of Swing Time:

-The working titles for the film were ‘I Won’t Dance’ and ‘Never Gonna Dance’, but studio executives worried that nobody would come see a musical when the title sounded as if no one danced.

-In The Way You Look Tonight Ginger Rogers is seen washing her hair. In reality soaps and shampoos washed down her face too quickly, so they used whipped cream instead.

-The climax dance scene Never Gonna Dance took 47 takes in one day to shoot and by the end Ginger Rogers’ feet were bleeding.

–Swing Time was the sixth of ten films Fred Astaire and Ginger Rogers made together.

-The first names of the two protagonists together make Lucky Penny.

-The famous Bojangles of Harlem number was a tribute to tap dancer and actor Bill ‘Bojangles’ Robinson.

–Swing Time was Ginger Rogers’ favourite of her films with Fred Astaire.

-The 44th American President Barack Obama referred to a quote from Swing Time in his inauguration acceptance speech.

-A Broadway musical based on the film called Never Gonna Dance began in 2003, but was closed in 2004. 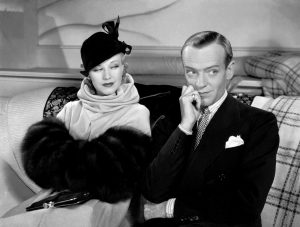 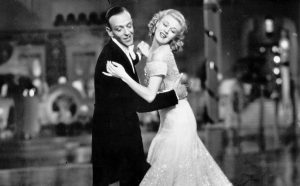 Fred Astaire and Ginger Rogers were one of the most famous and most popular pairings from the Classic Hollywood era. Fred was a dancer who acted and Ginger was an actor who danced. They complemented each other in a way few other on screen couples did. Swing Time is considered by many to be the best of their ten films together. With its light-hearted comedy, romantic plotline and elaborate dance scenes it capitalized on the actors strengths and the publics’ desires.
Swing Time is still considered to be an all-time classic and is still found in ‘Best films of all time’ lists all over the world.