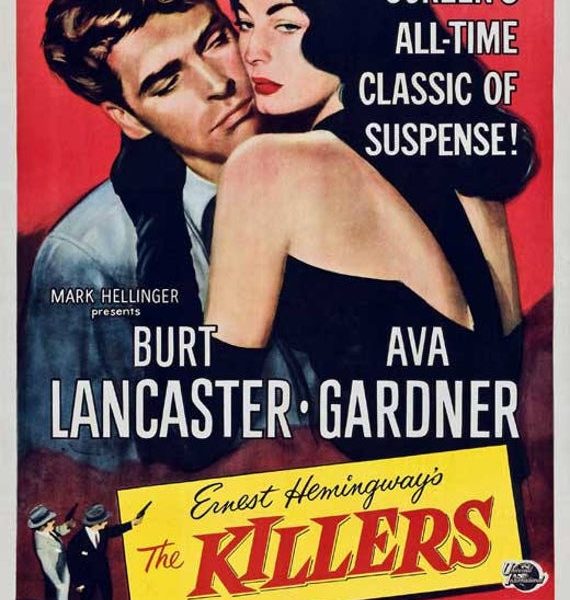 When two hit men kill the unresisting Ole Andserson (Burt Lancaster), life insurance investigator Jim Reardon (Edmond O’Brien) is assigned to find his beneficiary. He soon realizes that ‘the Swede’ was involved with a bad crowd and the even more dangerous Kitty Collins (Ava Gardner).

-Burt Lancaster was far from the first choice to play the Swede. He had been a professional acrobat and had only shot one movie. But every actor who was offered the part rejected it, so Burt got his shot as a leading actor at 33 in only his second film.

-Burt went all in for the role and trained for two months with a boxing champion. He played the boxing matches for the film with a real boxer, until he got knocked out multiple times.

-Ava Gardner had only had minor walk-on roles until The Killers. She was mostly known for being Mickey Rooney’s ex wife at that point in her career.

-The fictional Nick Adams only has a small role in the film, but he’s a nod to writer Ernest Hemingway. The character plays a role in most of his stories and was partly based on the writer himself.

-The Killers was so wildly popular upon its release, that New York cinemas stayed open 24 hours a day to meet the demand.

-Howard Hughes was obsessed with The Killers and would watch it multiple times a day, until he latched onto Ice Station Zebra (1968).

-Actress Virginia Christine, who plays the Swede’s first girlfriend, also appeared in the TV remake of The Killers in 1964. This time as a blind secretary.

-The Killers has become so synonymous with film noir, that it’s referred to as ‘The Citizen Kane of film noir’.

-Modern day band The Killers allegedly named themselves after this film.

The Killers was not only incredibly popular when released, it’s still seen as a film-noir staple. Everything, from the writing to the lighting, is analysed in books and articles detailing the genre. Although it wasn’t the first film noir, it definitely helped propel the genre to an all-time classic. It also propelled the careers of two unknown actors: Burt Lancaster and Ava Gardner. Both of them exude sex-appeal and it’s because of them that the viewer can’t keep their eyes off the screen. The roles they played in The Killers would also become a part of their image: Ava the sultry femme fatale and Burt the handsome good guy. They were perfect for their roles and we might not know their names today if it wasn’t for this inspired casting.
The Killers is one of the only film adaptations of his work that Ernest Hemingway approved of and praised and it remains the ultimate film-noir.