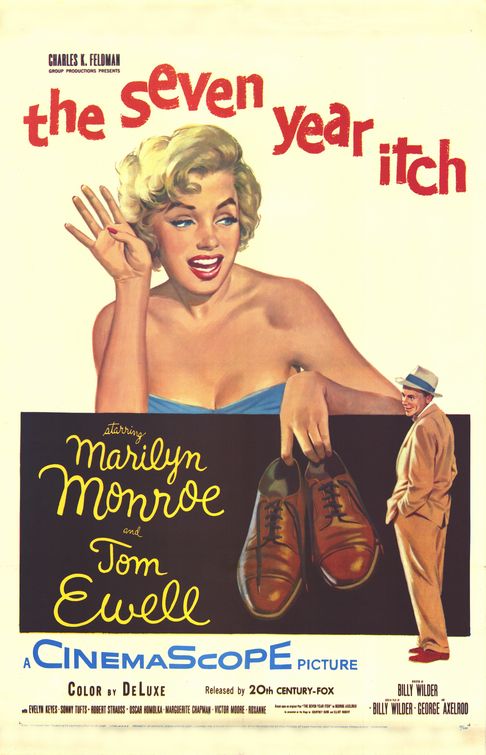 Richard Sherman (Tom Ewell),  like many other Manhattanites, packs his wife (Evelyn Keyes) and child off to summer vacation, while he stays behind to work. He begins to fantasize about other women and the opportunities he has now that his wife is out of town, but he promises himself he will not act on it. But then, he meets the girl (Marilyn Monroe) who rented the apartment upstairs for the summer….

The original trailer of The Seven Year Itch:

–The Seven Year Itch was based on a Broadway play by George Axelrod.

-Gary Cooper, James Stewart and William Holden were all considered for the role of Richard Sherman. Director Billy Wilder really wanted Walter Matthau for the role, but the studio did not want to take a chance on a newcomer. They eventually landed on Tom Ewell who played the part in the original Broadway play.

-Marilyn Monroe really wanted to be in The Seven Year Itch and work with prestigious director Billy Wilder. However, her studio would not let her do the film unless she agreed to be in There’s No Business Like Show Business, a movie she disliked.

-The original Broadway play had a lot more racy dialogue and plot twists, but due to the strict Hays Code, this was not allowed to be in the film.

-The famous scene of Marilyn Monroe’s dress blowing up as she stand over a subway grating was originally shot in the middle of New York with 5000 onlookers cheering and whistling. In reality this was only to promote the film, the noise of the crowd made the scenes unusable, so it was re-staged indoors on the Fox set later.

-Marilyn’s marriage to Joe DiMaggio was unraveling during filming. One of the things they reportedly fought about was the media circus surrounding the blowing dress scene. They filed for divorce after the film was finished.

-Director Billy Wilder wanted to shoot the film in black and white, but Marilyn’s contract called for all of her films to be shot in color.

-The promotional campaign for The Seven Year Itch was extravagant; they even erected a 52-foot-high cut-out of Marilyn Monroe (from the blowing dress scene) in Times Square.

-Marilyn Monroe’s iconic white dress was owned by Debbie Reynolds for decades. When she sold it in 2011, the dress set a record as it was auctioned for 4.6 million dollars. Quintupling the previous record for a movie costume from Audrey Hepburn’s little black dress from Breakfast at Tiffany’s.

-In the early 1980’s a remake of the film was in the works with Al Pacino rumored to play Richard Sherman and Melanie Griffith to play the Girl. However, the project never materialized. 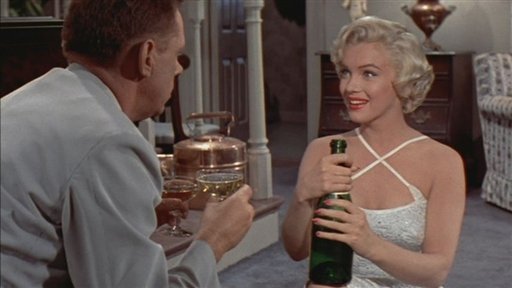 The Seven Year Itch is mostly remembered for containing the most famous scene in cinematic history: Marilyn Monroe’s dress blowing up over a subway grating. Ironically, the scene in the movie is very subdued as you only see Marilyn’s legs. But the, more racy, pictures taken to promote the movie are ingrained in everyone’s mind as it has become a cultural staple.
The film itself suffers from the restrictions of the Hays Code. Director Billy Wilder said years later that he felt ‘straitjacketed’ by the censorship and that it would have been better if he had done the film years later, when the Hays Code was not in practice anymore.
Still, Tom Ewell gives a great performance as the neurotic Richard Sherman and Marilyn Monroe is charming as ever as the naïve girl upstairs. She lights up the screen whenever she is in a scene and that saves the film. This is the reason why The Seven Year Itch is seen as a classic: because it is a Marilyn Monroe picture.