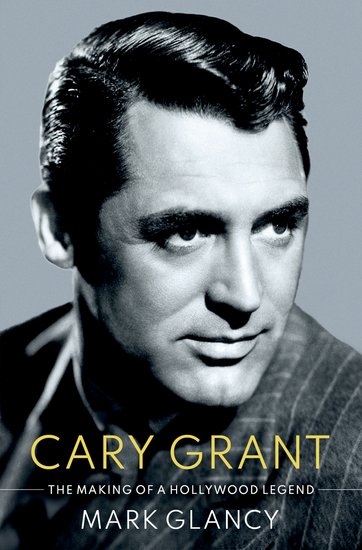 This giveaway has ended and the winners have been informed. Thank you to all who participated. You can order the book online in the U.S. and it will be released January 2021 in Europe.

Cary Grant is one of the handful of actors who can be described as a true Hollywood legend. To this day, his name evokes memories of a glamorous era gone by. But the notoriously private icon, who was born as Archie Leach, once admitted: ‘“I pretended to be somebody I wanted to be and I finally became that person. Or he became me. Or we met at some point.” Now you can find out how Archie became Cary through the new book Cary Grant: The Making of a Hollywood Legend by Mark Glancy. This definitive account is the first biography to be based on Grant’s own personal papers. And Oxford University Press has allowed Classic Hollywood Central to give away  5 copies to its U.S. readers!

For your chance to win, send your name and tell us why you would like to win Cary Grant: The Making of a Hollywood Legend to info@classichollywoodcentral.com before the 15th of October. (U.S. only). *

A definitive new account of the professional and personal life of one of Hollywood’s most unforgettable, influential stars.

“The definitive biography: forensic, myth-busting, and psychologically fine-tuned. Both a well-written work of scholarship and an entertaining ride through the life and work of one of Hollywood’s most fascinating stars.” – Mark Kidel, filmmaker and writer

Archie Leach was a poorly educated, working-class boy from a troubled family living in the backstreets of Bristol. Cary Grant was Hollywood’s most debonair film star–the embodiment of worldly sophistication. Cary Grant: The Making of a Hollywood Legend tells the incredible story of how a sad, neglected boy became the suave, glamorous star many know and idolize. The first biography to be based on Grant’s own personal papers, this book takes us on a fascinating journey from the actor’s difficult childhood through years of struggle in music halls and vaudeville, a hit-and-miss career in Broadway musicals, and three decades of film stardom during Hollywood’s golden age.

Leaving no stone unturned, Cary Grant delves into all aspects of Grant’s life, from the bitter realities of his impoverished childhood to his trailblazing role in Hollywood as a film star who defied the studio system and took control of his own career. Highlighting Grant’s genius as an actor and a filmmaker, author Mark Glancy examines the crucial contributions Grant made to such classic films as Bringing Up Baby (1938), The Philadelphia Story (1940), Notorious (1946), An Affair to Remember (1957), North by Northwest (1959), Charade (1963) and Father Goose (1964). Glancy also explores Grant’s private life with new candor and insight throughout the book’s nine sections, illuminating how Grant’s search for happiness and fulfillment lead him to having his first child at the age of 62 and embarking on his fifth marriage at the age of 77. With this biography–complete with a chronological filmography of the actor’s work–Glancy provides a definitive account of the professional and personal life of one of Hollywood’s most unforgettable, influential stars.

For your chance to win, send your name and tell us why you would like to win Cary Grant: The Making of a Hollywood Legend to info@classichollywoodcentral.com before the 15th of October. (U.S. only).*