Irish-American actress Maureen O’Hara, one of the last living stars from the golden age of Hollywood, has died aged 95, her manager said. She died in her sleep at her home in Boise, Idaho, Johnny Nicoletti said. Ms. O’Hara was called the Queen of Technicolor, because when that film process first came into use, nothing seemed to show off its splendor better than her rich red hair, bright green eyes and flawless complexion. The Quiet Man was one of five films where she appeared alongside John Wayne, and was the one she said she was most proud of. Her family said she had died listening to music from the film.

Maureen FitzSimons was born on Aug. 17, 1920, in Ranelagh, Ireland, on the outskirts of Dublin. She was the second of six children of Charles FitzSimons, a clothing-business manager and part-owner of a soccer team, and the former Marguerita Lilburn, a singer. Maureen began appearing in school plays as a child and was accepted as a student at the Abbey Theater in Dublin when she was 14.
Her Hollywood movie career almost did not happen. After she appeared in two British musicals, “Kicking the Moon Around” and “My Irish Molly,” in 1938, a screen test was arranged by a British studio. Ms. O’Hara was horrified by the results, particularly the way she looked in the heavy makeup and the gold lamé gown with strange, winglike sleeves that she had been given to wear.
But Charles Laughton happened to see the test and, he said, liked something about her eyes. He promptly cast her in the crime adventure “Jamaica Inn” (1939), of which he was a producer as well as the star. The film was Alfred Hitchcock’s last British project before moving to Hollywood. Ms. O’Hara ended up moving, too.
In her first two decades in the United States she made some 40 feature films, including five with John Ford, a sometime friend and sometime enemy whom she later described to the Irish newspaper The Sunday Independent as “an auld devil and cruel as hell.” Some of her most succesful films during this time were: Miracle on 34th Street, How Green Was My Valley, This Land Is Mine and The Quiet Man. 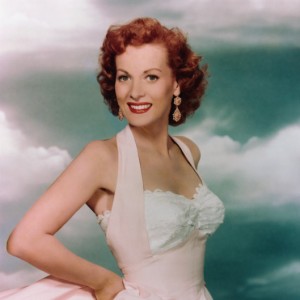 In 1960 she played the title character in a television remake of “Mrs. Miniver,” and overnight, it seemed, she was transformed from the fiery young love interest to the dependable, well-preserved wife/mother/widow. Her best-known films from that period were “The Parent Trap” (1961), “Mr. Hobbs Takes a Vacation” (1962) and “Spencer’s Mountain” (1963).
Long before the paparazzi roamed Southern California, Ms. O’Hara had a memorable encounter with a celebrity tabloid. In 1957, the magazine Confidential published an article that accused her of improper amorous behavior in a public movie theater. She sued for libel and presented her passport to prove that she had not been in the country when the activity was supposed to have taken place. The case was eventually settled out of court, but it contributed to the magazine’s eventual demise.
Ms. O’Hara was married three times. In 1939, just before she left for the United States, she wed George H. Brown, a British film producer who later became the father of the magazine editor Tina Brown. That marriage was dissolved in 1941, and that same year she married her second husband, Will Price, a writer and director. They had a daughter, Bronwyn FitzSimons, and were divorced in 1953.
Fifteen years later she married Gen. Charles F. Blair, an Air Force aviator who operated Antilles Air Boats, a small Caribbean airline. The couple lived in St. Croix, in the Virgin Islands, and she largely left show business behind, choosing to publish a magazine, The Virgin Islander, for which she also wrote a column. She took over Antilles after General Blair’s death in 1978.
Ms. O’Hara eventually returned to film, playing the overbearing mother of John Candy’s character in the 1991 comic drama “Only the Lonely.” Over the next decade she starred in three television movies: “The Christmas Box” (1995), “Cab to Canada” (1998) and “The Last Dance” (2000), in which she played a retired teacher helped by a former student (Eric Stoltz). It was her final screen appearance.
Ms. O’Hara received an Irish Film and Television Awards lifetime achievement honor in 2004 and published an autobiography, “’Tis Herself,” the same year. Never nominated for an Oscar (although she received an honorary Academy Award last year), O’Hara nonetheless starred in some of the best-known and beloved movies of Hollywood’s Golden Age.
She is survived by her daughter, a grandson and two great-grandchildren.

Julie Harris dies at the age of 87