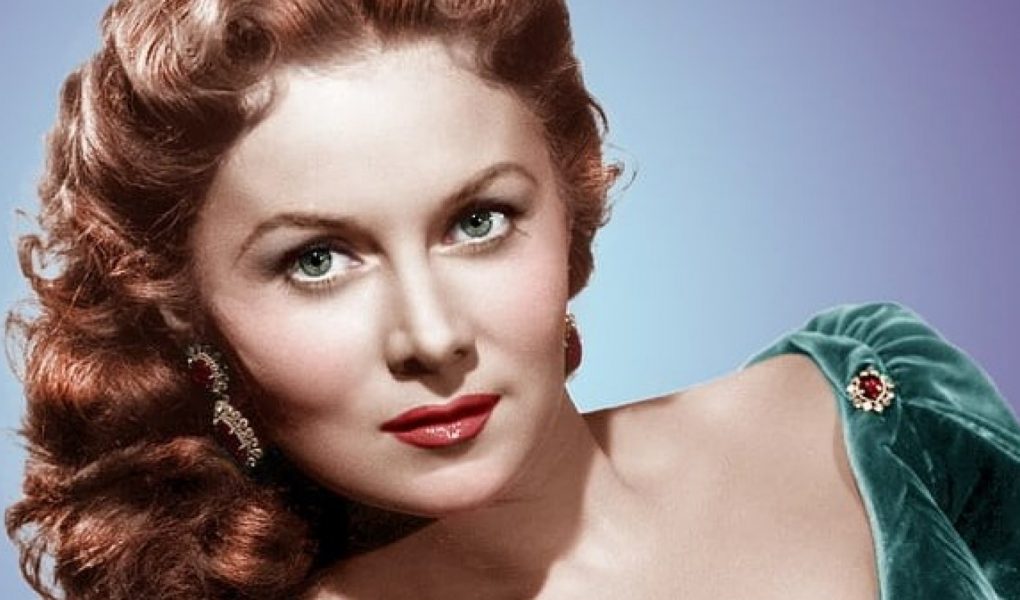 Rhonda Fleming, who was once nicknamed ‘The Queen of Technicolor’, has died last Wednesday at the age of 97. She starred in many films throughout the 40’s and 50’s, like Hitchcock’s Spellbound, and worked with actors like Burt Lancaster, Ronald Reagan and Kirk Douglas.

Rhonda’s Hollywood story was a great one: she was discovered while walking to her class in Beverly Hills High School. The man who approached her was big time agent Henry Wilson. The teenager, who was actually named Marilyn Louis, quickly signed a contract with producer David Selznick. Her first big role was in Hitchcock’s Spellbound and she followed it up with films like The Spiral Staircase, Out of the Past and Adventure Island.

It was her role in Bing Crosby’s musical A Connecticut Yankee that really made her standout. It was her first film in Technicolor. “Suddenly my green eyes were green. My red hair was flaming red. My skin was porcelain white,” Fleming remarked in a 1990 interview. “There was suddenly all this attention on how I looked rather than the roles I was playing. I’d been painted into a corner by the studios, who never wanted more from me than my looking good and waltzing through a parade of films like The Redhead and the Cowboy.” After starring with Bob Hope in The Great Lover, she was mostly cast in B-movies. “I made the mistake of doing lesser films for good money,” she reflected in a 1976 interview. “I was hot — they all wanted me — but I didn’t have the guidance or background to judge for myself.” After the 50’s, Rhonda set her sights on Las Vegas and occassional roles on television.

While still in her teens, Fleming married her high school sweetheart, Thomas Lane. A son, Kent, was born in 1941. When Lane returned from Army service, Rhonda had become a star, and the marriage ended in 1947. Three other marriages also ended in divorce, to Beverly Hills surgeon Lewis Morrill (1952-1958); actor Lang Jeffries (1960-1962); and producer-director Hall Bartlett (1966-1972). In 1977 Fleming married mogul Ted Mann, who built the Mann Theater chain, and the marriage lasted until his death in 2001. For many years, they lived in matching 4,300-square-foot condominiums, one on top of the other in a Century City high-rise. “I treasure my privacy, and Ted needs his,” she once explained. “We love each other very much. I’m much more fulfilled today than at any time in my life.”

After Fleming’s sister, Beverly Engel, died of cancer in 1991, Fleming and her husband established the Rhonda Fleming Mann Resource Center for Women with Cancer at the UCLA Medical Center. She was also active in various other charities for cancer patients, children and the homeless. A couple of years after Mann died, Fleming married for a sixth time, to Derol W. Carlson, who died in 2017.
She is survived by her son, Kent Lane, as well as two granddaughters, five great-grandchildren and two great-great-grandchildren.