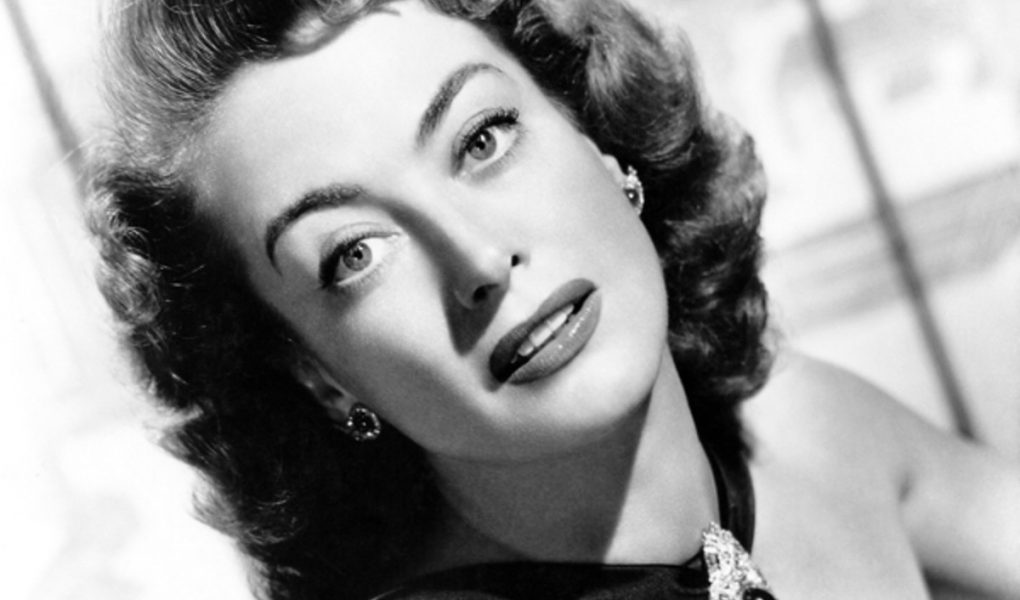 Joan Crawford was born as Lucille Fay LeSueur in San Antonio, Texas on March 23, 1904 (depending on the source). Around the time she was born, her father left the already struggling family. Alone with two children, Lucille and her big brother Hall, their mother Anna decided to find her luck in Lawton, Oklahoma. There, Anna married Henry Cassin who ran the local opera house. Lucille loved to watch artists perform at the opera house and she became obsessed with dancing.

She would put on shows in her backyard and make neighbourhood kids watch. It has been said that Henry Cassin sexually abused Lucille and that her mother blamed her for it. It is definitely true that Lucille and her mother were never on good terms and when the family moved to Kansas to run a hotel, Lucille was used as a housekeeper. In 1916 she was enrolled at St. Agnes Academy as a working student, which alienated her from the other students who simply saw her as a hired help. Her mother and stepfather separated and her mother soon found a new partner in a Mr. Hough. Lucille would later say that he made a pass at her and that her mother responded by sending her to a strict boarding school, again as a working student. After graduation, and a short stint at college, Lucille worked as a chorus girl in a club in Chicago. Broadway impresario J.J. Shubert spotted her and gave her a role in his revue Innocent Eyes. In New York, Lucille finally felt at home and she had the time of her life and a full dating schedule. When a talent scout for Hollywood studio MGM saw her performing, he wasted no time and offered her a contract. At nearly twenty-one, she was off to Hollywood.

When Lucille arrived in Hollywood, she did everything she could to become a star. She took in every piece of advice she could get, studied every aspect of film making and was smart enough to know that Hollywood was all about being seen. She was present at every party, dated a lot and continued showing off her dancing skills at competitions. The studio saw her potential, but they hated her name. MGM’s savvy PR people arranged for a contest in a magazine, so readers could choose her new name. Joan Arden was chosen, but there already was an actress with that name. So she became Joan Crawford.
After some minor roles, Joan was finally noticed by Hollywood, for her role in Sally, Irene and Mary in 1925. She would later peg that film as the first time she felt that she had staying power in Hollywood. She became the romantic female lead for many male stars, but her big break was still to come. Her new contract gave her a pay raise, which prompted her mother and brother to come live with her. This turned out to be a big mistake as they got into trouble, spent a lot of her money and would threaten to sell nasty stories about Joan if she didn’t comply with their wishes. She quickly moved somewhere else and in the future she would reportedly cut all ties with them. But there was good news too: she had embarked on her first serious relationship, with actor Douglas Fairbanks Jr. The two up-and-coming stars were head over heels in love with each other. This was truly Joan’s time to shine as she also starred in her big break: Our Dancing Daughters. In it she played a Jazz-era flapper and that fit perfectly with Joan’s reputation. Suddenly every girl wanted to be like Joan.

MGM decided to bank on Joan and Douglas’ relationship by pairing them up for Our Modern Maidens, Joan’s last silent picture. After filming, Joan and Douglas were married in a small Catholic ceremony. Douglas’ father and stepmother, the famous Douglas Fairbanks and Mary Pickford, did not attend as they did not find Joan ‘the kind of girl you should marry’. Despite his family’s opposition, the young couple had a blissful honeymoon phase and the public loved them.

Meanwhile, Joan made a smooth transition to talkies. She had studied hard to get rid of her southern accent and her in-law’s rejection made her determined to come across as more of a lady. It worked both on screen and in reality, as she was finally invited to the famous Pickfair estate. But Joan soon grew bored of her husband and was dismayed at his lack of ambition. In 1931 MGM cast her in three films with Clark Gable: ‘Dance, Fools, Dance’, ‘Laughing Sinners’ and ‘Possessed’. They were all incredibly popular and made Joan an A-list movie star. She was subsequently cast in the first all-star film Grand Hotel alongside icons like Greta Garbo and John Barrymore. When the first ‘Top Ten Money Making Stars’ poll was released, she was placed third. Meanwhile, she had started a passionate affair with Clark Gable. By the time Douglas found out, he himself wasn’t monogamous anymore either. In 1933 Joan filed for divorce. Joan wasted no time and quickly fell for another actor: the distinguished Franchot Tone. This is reportedly where her infamous feud with Bette Davis started: during the filming of Dangerous, Bette had a huge crush on Franchot and rumors about an affair were everywhere. It is said that Joan married Franchot in 1935 mostly as a message to Bette to stay away from her man. Franchot introduced Joan to the theater and opera and she adored him. Unfortunately he hated being ‘Mr. Joan Crawford’, started drinking more and became physically abusive. While Joan was trying to get her husband into big pictures so he could be a star too, her own star started to dwindle. In 1938 she was labeled ‘box-office poison’, alongside esteemed colleagues like Katharine Hepburn, because her high salary didn’t reflect in her ticket sales. But only a year later she proved them all wrong when she starred in the successful feature The Women. Still, things were not going well for Joan: Fronchot drank more and more and she had two miscarriages while she so hoped for a baby. Eventually Joan was done with Franchot’s behavior and in 1939 the pair separated. Joan focused on her work again and surprised critics with her in-depth performance of a facially disfigured blackmailer in A Woman’s Face.

In her early- to mid –thirties now (depending on the source) Joan desperately wanted to be a mother and decided to adopt. In 1940 she adopted a daughter named Christina. Motherhood made her so happy that in 1941 she adopted another child: a baby boy named Christopher. But her heart broke when, after caring for the child for almost a year, the birth mother chose to take the baby back. Alone with her daughter, she looked for a father for her child and felt she found one in actor Phillip Terry. They married after only a few months together and in 1942 they adopted a boy they named Phillip Terry Jr. Joan hoped that with a new husband and two children, she would finally have the picture perfect family she so craved.
Meanwhile her movies at MGM were not as successful as they once were and Joan was disappointed with the roles they offered her. She decided to make the switch to Warner Bros. Studios. She fought for and won the starring role in the crime-drama Mildred Pierce. It was a good call as the film became a huge success and finally earned her the coveted Best Actress Oscar. It revived her faltering career, but as an ‘older’ woman in Hollywood it was still difficult to get good parts. Her marriage to Phillip didn’t last long and they divorced in 1946.  Joan subsequently changed her son’s name from Phillip Jr. to Christopher, to fit better with Christina. She went on to date lawyer Greg Bautzer off and on, but it never turned into anything serious. In 1947 she adopted twin girls she named Cathy and Cindy.

But as ever, Joan worked tirelessly and filmed pictures back to back. In 1952 she left Warner Bros. because of the bad scripts she was constantly given, but had trouble finding better parts for herself.

It was in 1955 that Joan started dating the man that would finally give her the stability she craved: Al Steele. Al was the CEO of Pepsi-Cola and thus a well respected businessman. He was strong and stable and not threatened by her star status. After only a handful of dates, Al announced to Joan that they were going to get married someday and on May 10, 1955 they did. They became known as the ‘Pepsi King and Queen’ and Joan threw herself into promoting the brand. The pair moved to New York and Al became a real father figure for her youngest children Cathy and Cindy. So Joan was devastated when in 1959, Al passed away from a suspected heart attack. A year earlier her mother had passed away, which hit her harder then she expected, so it was a dark time of grief for Joan. This was worsened by the fact that she didn’t get a huge inheritance from Al as expected, but was actually left nearly penniless. She struggled to get movie roles and started to become a forgotten star of days gone by. Until she found a script that gave her an inspired idea: teaming up with old rival Bette Davis. Whatever Happened to Baby Jane? was a horror script about two rivaling sisters and Joan saw its potential. She personally lobbied to get the film made and looked up Bette Davis to convince her to co-star. Filming and promotion were a task for both women, as has been documented in many books and series since. But it revived both of their careers and it solved Joan’s financial problems. Joan subsequently starred in another horror flick called Strait Jacket and signed on to do another film with Bette. But while on set of Hush…Hush, Sweet Charlotte tensions between Joan and Bette grew to such a degree that Joan became ill and entered a hospital. She was accused of faking it and was swiftly replaced by Olivia de Havilland.

By the late sixties, Joan struggled to keep her career going. It was very difficult for a woman her age to get good roles in Hollywood and it was an open secret that Joan was heavily reliant on alcohol.

She made an appearance in a few television shows, but her final picture was the 1970 film Trog. The film was a low-budget sci-fi horror and it was seen as an embarrassment for Joan. Her final foray into public life was the release of her book My Way of Life in 1971. People were hoping for an honest glimpse into her life, but got old-fashioned advice on fashion and exercise instead. Joan moved to New York and when she saw an unflattering picture of herself in the newspaper in 1974, she decided to skip public life altogether. She stayed inside, became a devout Christian Scientist and quit alcohol. Though she was quite lonely, she refused to do interviews or appearances, wanting the public to remember her as she was. Plagued by health problems, she died on May 10, 1977 of a myocardial infarction.
Ironically, for someone who always tried to maintain a solid and ladylike image, she was kept alive by controversy after her death. In 1978 her daughter Christina released the book Mommy Dearest. In it, she claimed that Joan was emotionally and physically abusive to her. Some who knew her, like her son Christopher, agreed. Others, like her other daughters Cindy and Cathy, did not. Whatever the case, Joan is still associated with the book and subsequent 1981 film. Her feud with Bette Davis is also a popular source of discussion. It was the subject of many books and a popular 2017 TV-series.