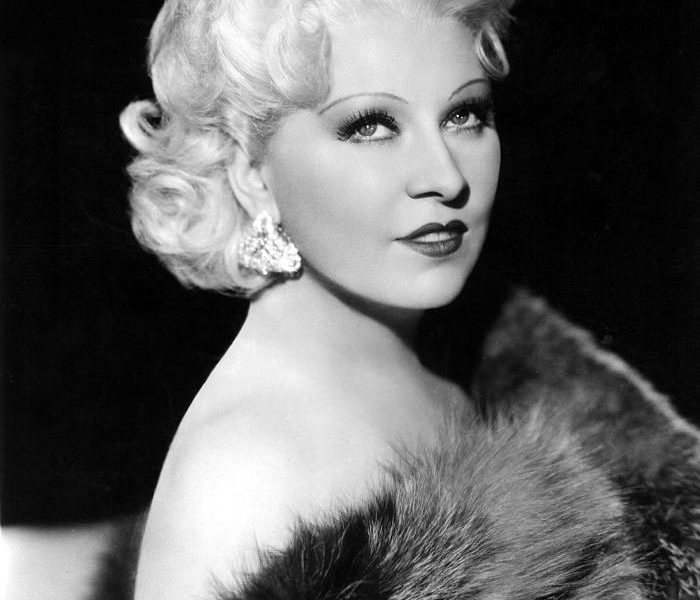 Mae West was born as Mary Jane West on August 17, 1893 in Brooklyn, New York. Mae, as she was called, was the second child of parents John and Tillie. Their first child Katie had passed away after only a few months, making them especially grateful for the healthy and lively Mae. Even after her sister Beverly and brother John Jr. were born, Mae continued to be the star of the household. She took after her parents: John used to be a prizefighter known as Battlin’ Jack and her mother was a former corset- and fashion model. Mae made her stage debut at age five at a church social and fell in love with the spotlight right away. Her mother had wanted to be an actress and saw the determination in her little girl. So by the age of seven, ‘Baby Mae’ started performing in amateur shows and local contests. Mae was ambitious and would rather work on her act than play with other kids or do her homework. At fourteen she started performing vaudeville professionally by joining the Hall Clarendon Stock Company.
As a teenager Mae enjoyed the company of boys and at the age of seventeen she found herself married to fellow performer Frank Szatkus. She regretted it quickly, later admitting that marriage was not for her, and they separated after a few months. Nobody knew they had been married, but Mae did not get an official divorce.

Still, she fell hard for Italian accordion star Guido Deiro only two years later. Their passion for each other was all consuming and for the first time in her life something other than work was on her mind. According to Guido’s son, the pair were (illegally) married and Mae went on to have an abortion, which caused their break-up. This has not been confirmed and Mae herself said that his possessiveness and jealousy caused her to break it off. Whatever the case, she quickly decided that work would be her focus from now on.

In 1918 Mae got her big break starring in the Shubert Brothers revue Sometime. She spiced up the performance by doing the Shimmy, a dance she had seen in a Chicago café catering to African Americans. It caused a sensation and the show gave her the opportunity to star in her own one-woman shows. During this time she hired James Timony as her manager and he was reportedly also her lover for awhile. He would go on to become her best friend and they were extremely close until his death in 1954. But Mae wanted more out of her career and she took some time off to reflect. Her mother encouraged her to write her own material and in 1926 she debuted on Broadway with her own play titled Sex. Never one to shy away from controversy, the show contained topics such as prostitution, drugs and suicide. A risky move in the conventional 1920’s. It did not take long for the theatre to be raided by police and Mae was arrested on moral charges. Instead of paying the fine, she chose to spend eight days in prison. She thought the experience was eye-opening and later said ‘I never forgot all those unlucky girls who didn’t get the start in life I did’. It also gave her a lot of publicity and she was now the beloved ‘bad girl’ of Broadway. Mae continued to write and star in plays, but it was her 1928 play Diamond Lil’ that made her a true star.

The main character was a down-to-earth, balsy woman, with a wicked sense of humor. It would be her stage-persona forever more. The show was a huge hit and it would be revived multiple times during her career.
In 1930 Mae’s beloved mother passed away from cancer. Mae was devastated and would later say that she would never have ‘the same carefree happiness after that’. She threw herself into work, staging new plays and writing two books. By now, she was such a star attraction, that Hollywood took notice. She received several offers from studios and in 1932 she signed with Paramount Studios.

At almost 40 and already a bonafide star in the theatre, Mae did not need Hollywood as much as they needed her. The first thing they signed her to was a small role in the film Night After Night starring her old buddy George Raft. She was unhappy with the part and convinced the studio to let her rewrite her scenes. She stole the picture when another character exclaimed: ‘Goodness, what beautiful diamonds’, and she replied: ‘Goodness had nothing to do with it, dearie’.
In 1933 it was finally time for Mae’s real debut: she was bringing Diamond Lil’ to the screen. The story had to be reworked to please the censors. It was re-titled She Done Him Wrong and Diamond Lil’ became Lady Lou. She insisted on hiring newcomer Cary Grant as her co-star, for which he was forever grateful. She Done Him Wrong was controversial fun, something audiences in the middle of The Great Depression could appreciate: it made $2 million, the equivalent of $140 million today. The film saved Paramount from bankruptcy and it gave Mae an Academy Award nomination for Best Picture. She went right back to work with her next picture I’m No Angel, again co-starring Grant.

By now, she was the largest box-office draw in America. The creative community, from F. Scott Fitzgerald to Frida Kahlo, raved about this new acting/writing/directing phenomenon. But their more conservative counterparts were not so keen on Miss West. The censors scrutinized her screenwriting over and over, leaving many great lines on the cutting room floor. Nevertheless, the public loved Mae and she released Belle of the Nineties (originally Ain’t No Sin, but the censors hated that title) in 1934.
In January 1935, Mae’s father passed away. She had just bought a house for him near her in L.A., just like she did for her brother and sister. Though upset, she kept on working because she believed that is what her father would have wanted. She made four movies back to back in the next two years, which were all reasonably successful. Meanwhile her ‘husband’ Frank Szatkus returned to her life, announcing their marriage to the press and suing her. After years of going back and forth in court, Mae was granted a divorce in 1943.
She returned to the screen in 1940, after a small break, with My Little Chickadee opposite W.C. Fields. Despite problems due to Fields’ drinking, the film was a box-office hit. Unfortunately this was not the case for her next film The Heat’s On, which she mostly did as a favor to director Gregory Ratoff. By now, Mae’s creative freedom was curtailed in Hollywood. The censors cut most of her jokes and interesting storylines and the studios wanted to control every aspect of her films. So she went back to her first love: the stage.

Back to the Stage

Mae had wanted to do a film about Catherine the Great for years, but no one was interested. In 1944 she took her show Catherine Was Great to Broadway. It turned out to be a raging success and she subsequently toured the country with the play. After this success, Mae felt it was the right time to bring back Diamond Lil’. This time she also toured England with her fan favorite and she found that she was just as popular overseas as she was in the U.S. The sky was the limit and her manager and confidant James Timony convinced her of the untapped potential of a show in Las Vegas. Unfortunately, he passed away before seeing it come to fruition.
A few months later, in July 1954, Mae opened her first ‘musclemen’ act in the newly opened Sahara Hotel in Las Vegas.

In this act Mae was surrounded by professional bodybuilders and the show proved to be a major success. She also developed a relationship with one of her musclemen: a former member of the merchant marines and Mr. California Paul Novak. He quickly moved in with her and would be her devoted companion until her death. In the meantime Mae had been approached about starring in multiple films. Among them: Sunset Boulevard, Roustabout with Elvis Presley, Pal Joey with Marlon Brando and multiple Frederico Fellini movies. She turned them all down. Usually because they would not let her have full control over her character and lines, a must for Mae. She knew exactly what the audience wanted to see and who the Mae West ‘character’ was and she was not willing to hand over control. She did occasionally make an appearance on television, usually for select interviews. Though her Person to Person interview in 1959 was cut because some of her quips were still considered too controversial. That same year she released an autobiography titled Goodness Had Nothing To Do With It, which became an instant best-seller. She also sang Baby It’s Cold Outside at the Academy Awards alongside Rock Hudson, followed by a standing ovation. There was no denying that Mae’s star power had endured. But she was getting tired of all the traveling and after her last stage play Sextette in 1961, she (temporarily) retired.

Mae had lived in her Art Deco apartment in a building called Ravenswood since the thirties, it was her sanctuary. Paul lived with her and though they were private, they would admit to friends that they were the loves of each other’s lives. Paul was her driver, bodyguard, cook, assistant and whatever else she needed from him. He took care of Mae in every way: when she found out she had diabetes in 1964, Paul was the one who watched her diet and exercise regimen. This was especially prudent since her little brother John passed away that same year.

Spirituality had always played an important part in Mae’s life. Mae was very spiritual and she loved talking to and consulting psychics. It was her spiritual advisor who told her it was a great idea to star in Gore Vidal’s Myra Breckinridge in 1970. Although she was able to write many of her lines, a lot was cut and the film was not as good as she had hoped it would be. Still, she had fun and the public was happy to see her back on screen. The youth of the seventies embraced Mae, as she fit perfectly in their sexually liberated era. Always a business woman, Mae released the book Sex, Health, and ESP in 1975. She was a modern woman who kept up with the times. She loved the new style of actors and was friends with Elvis Presley. At the age of 84 she set out to do her last feature: the film version of her play Sextette. The film paired her up again with her first co-star George Raft (per her request) and big names such as Ringo Starr and Alice Cooper. Pretty much everyone involved signed on just to be able to work with Mae. The film was no success, but Mae enjoyed working one last time and was surprisingly fit and energetic during filming.
Mae, with the help of Paul, stayed relatively healthy and youthful throughout her life. So it was a surprise for everybody when she suffered a stroke in August 1980. Her friends and family hoped that she would recover. Unfortunately, she was never able to regain her speech and mobility and she passed away at home on November 22, 1980 at the age of 87. Although the public saw Mae as very extroverted, she actually liked her privacy . So Paul decided on a small, private funeral. She was interred in the family plot in New York alongside her beloved mother, father and brother.