On June 1st  1926 Marilyn Monroe was born in Los Angeles as Norma Jeane Baker. Her mother was Gladys Baker, a troubled film cutter at Consolidated Film Industries, and her father was unknown. After a few days Norma Jeane was placed in the care of Ida and Albert Bolender, because Gladys did not have the financial means to take care of her. 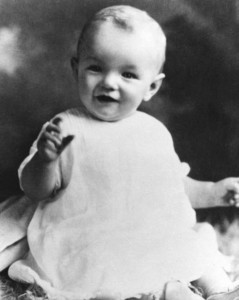 Norma Jeane lived with the devoutly religious couple until she was seven. In 1933 her mother brought Norma Jeane home to stay with her. Unfortunately, Gladys was mentally unstable and began to have a series of mental episodes that would haunt her daughter for the rest of her life. A couple of months before Norma Jeane turned nine, her mother was forcibly removed from her home and institutionalized. Gladys’ best friend Grace Goddard became the little girl’s guardian, but because she did not have a lot of money, she put Norma Jeane in an orphanage. This was followed by a succession of foster homes.
When she was eleven she moved in with Grace and her new husband Doc Goddard. But five years later the couple decided to move and they did not take Norma Jeane with them. To make sure that she was taken care of, it was decided that she could marry a boy from the neighborhood whom she had been dating: Jim Dougherty. So Norma Jeane had a choice: marriage or back to the orphanage. On June 19th 1942 she married Jim and she subsequently dropped out of school. In 1945 Jim, who was in the Merchant Marine, was shipped overseas and Norma Jeane began to work in the Radioplane Munitions Factory. It was there that she was discovered as a model by a photographer on assignment. 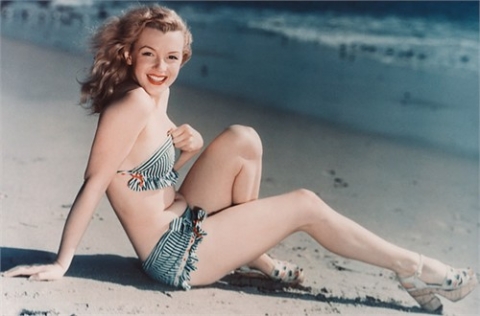 Norma Jeane signed with The Blue Book modeling agency and appeared on multiple magazine covers. Her ambition soared and she decided that she wanted to become an actress. Soon she was discovered by Ben Lyon, the casting director at 20th Century Fox and received a contract at the studio. Together with Ben Lyon Norma Jeane thought of the stage name that she would forever be known by: Marilyn Monroe. Monroe was her mother’s maiden name and according to Lyon a double ‘M’  was a lucky omen. A couple of months later, in the autumn of 1946, she divorced Jim. Although she cared for Jim, she reportedly felt that she was forced into the marriage by the Goddards.

She did not get any big parts at Fox and her contract ended in 1947. She then worked for Colombia Pictures for a couple of months before she met powerful Hollywood agent Johnny Hyde. Hyde was immediately taken with her and helped her become the ‘blonde bombshell’ that we all know today. He made sure her hair was always dyed a perfect platinum blonde, bought her a new wardrobe and according to sources he even arranged for her to have plastic surgery on her nose and chin. In 1950 Hyde passed away, leaving Marilyn devastated, but not before he had secured a new contract for her at 20th Century Fox. Although the head of Fox, Darryl F. Zanuck, did not see much potential in Marilyn and only gave her small parts again, she quickly became popular with the audience.  Zanuck noticed and in 1953 Marilyn finally got a leading role. She played one half of a showgirl duo in the comedy Gentleman Prefer Blondes. The film became an instant hit and was quickly followed by another successful feature: How To Marry A Millionaire. Marilyn was finally a star. 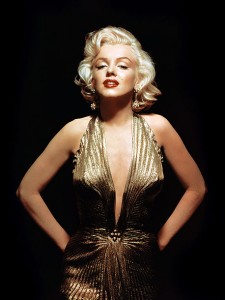 Meanwhile, she started seeing baseball icon Joe DiMaggio and the public could not get enough of this golden couple. In January 1954 the two were married. Marilyn’s career was at an all time high, but she still quarreled with Fox. They did not give her the parts she wanted and she had to agree with a part in There’s No Business Like Show Business to get permission to play in The Seven Year Itch. The famous scene in the film where the air from a subway grating blows her skirt up, might have been good for her career, but not for her marriage. Joe was present when the scene was filmed and was infuriated by the spectacle, which led to a big fight between the couple. It was the end of their already troubled marriage and they divorced in November 1954.

Meanwhile, Marilyn had befriended photographer Milton Greene and they decided to form Marilyn Monroe Productions so she would have more control over her career. She also started taking acting lessons with Lee Strassberg at the famous Actors Studio, where Montgomery Clift and James Dean studied acting as well. She was determined to improve her skills and desperately wanted to be taken seriously as an actress. Marilyn’s intellectual life was also stimulated by her blossoming relationship with writer and Pulitzer Prize winner Arthur Miller. The two had been exchanging letters for years and Marilyn admired him deeply. In June 1956 they were married. Soon after the wedding the couple went to England, where Marilyn was making The Prince And The Showgirl with Laurence Olivier. But Olivier and Marilyn did not get along and he made her insecure about her acting skills. Her personal life wasn’t looking good either: during filming she had found Arthur’s notes in which he described how disappointed he was with their marriage and how she embaressed him sometimes. Marilyn had already developed a habit of taking a lot of prescription drugs and it only became worse as her insecurities grew. She decided to take a year off, but it did not help much. She returned to Hollywood in 1958 to work on Some Like It Hot. But Marilyn had trouble remembering her lines and everybody involved was annoyed by her unpredictable behavior. At the same time her marriage was falling apart and she was heartbroken over the three miscarriages she had suffered over the past three years. But all of her problems did not affect the film: Some Like It Hot was a success and is her most popular film to this day. In 1959 she filmed Let’s Make Love with Yves Montand. They started an affair that ended in tears when it became clear that Montand never intended to leave his wife for her. In the meantime Miller was busy with the pre-production of his screenplay The Misfits. Marilyn, Clark Gable and Montgomery Clift were starring in it. Marilyn was in bad shape during filming and even had to be hospitalized for ten days, according to reports because of an overdose. When filming ended Miller filed for divorce and Marilyn started seeing Joe DiMaggio again. Whether as friends or as lovers is not certain, but it is said that they got engaged again shortly before her death.

In 1961 Marilyn signed into a psychiatric clinic to get some much needed rest but found herself in a lockdown psychiatric ward for seriously disturbed patients. She managed to get a message to Joe, who immediately came to her rescue and got her out. A few months later she had two surgery’s in a row: a gynecological surgery and a gallbladder surgery.
She spent the next months resting with Joe DiMaggio and Frank Sinatra. It was through Frank Sinatra’s inner circle that she met president John F. Kennedy and it is assumed that the two started an affair. In April 1962 she began working on the film Something’s Got To Give, although she did not like the script. In May she famously sang Happy Birthday at the birthday celebration of John F. Kennedy in Madison Square Garden. Around this time Kennedy reportedly ended his affair with Marilyn, which is said to have left her heartbroken. Rumors have always swirled about her having an affair with his brother Robert Kennedy as well, but this has never been confirmed. Meanwhile, Marilyn was not on the set of Something’s Gotta Give most of the time due to fever, headaches, chronic sinusitis and bronchitis. Because she only reported for work on twelve occasions out of a total of thirty-five days of production she was dismissed and 20th Century Fox filed a lawsuit against her for half a million dollars. 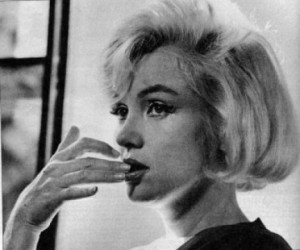 Marilyn did a lot of photo shoots and interviews in the following months. Her last interview, for Life magazine, was published only a few days before her death. Reports of her last days differ, but most people say she was in pretty good spirits. 20th Century Fox wanted to get her back on board for Something’s Gotta Give and she was in talks about a couple of new film projects.
On the evening of August 4th 1962 Marilyn talked to a few friends on the phone, such as Joe DiMaggio Jr.  and John F. Kennedy’s brother in law Peter Lawford. At 4:25 a.m. on August 5th the police was called by her psychologist Dr. Ralph Greenson who said that Marilyn Monroe had committed suicide. She was found lying on her bed with the telephone still clutched in her hand. Although the Los Angeles County Coroner’s office recorded her cause of death as ‘a probable suicide’, it is still surrounded by mystery and it has been the subject of many conspiracy theories ever since.

See her life in pictures in the Marilyn Monroe Gallery.

Something’s Got To Give 1962
Ellen Wagstaff Arden

The Prince and the Showgirl 1957
Elsie

River of No Return 1954
Kay Weston

How To Marry A Millionaire 1953
Pola Debevoise

All About Eve 1951
Miss Casswell

A Ticket To Tomahawk 1950
Clara

Ladies of the Chorus 1948
Peggy Martin